Summary: St Bridget of Sweden, Religious. Born in Sweden about 1303; died at Rome on this day in 1373. A devoted wife and the mother of eight children. After being widowed, Bridget founded a religious order (Bridgettines). Noted for her asceticism, her dedication to reform within the Church, and her lifelong mystical experience of Christ. Bridget of Sweden was canonised by Boniface IX in 1391.

Bridget of Sweden had a profound influence on the affairs of Europe. Married at thirteen, she had eight children. After her husband died, she became a nun and founded the Bridgettine Order. She spent much of her life on pilgrimage in Italy, trying to persuade the Pope to return from Avignon in France to Rome. She also made a pilgrimage with her daughter and son to the Holy Land. She was named co-patroness of Europe by Pope John Paul II in 1999.

Early years
Born in 1303 to parents who were close to the royal family, Bridget’s mother died when she was very young and she was brought up by an aunt. As a seven-year-old girl she had a vision where the Virgin Mary put a crown on her head. When she was ten years old, she saw the crucified Christ in a vision, for the first time. From these early days, Bridget became devoted to God’s service with the Passion of Christ at the centre of her devotion.

Her marriage and work
Bridget wanted to enter a convent, but when she was fourteen she was married off to the courtman Ulf Gudmarsson. They lived happily together for twenty-eight years and had eight children, four sons and four daughters. She also took care of some unmarried women with children. Bridget became lady-in-waiting to Blanche of Namur, the wife of King Magnus Eriksson of Sweden. She exerted a strong religious influence over her husband and when their youngest son died in 1340, they went on pilgrimage to Santiago de Compostela. Ulf died shortly after their return.

Order of the Most Holy Saviour
After her husband’s death, Bridget sensed Christ calling her to found a new religious order. She called it the Order of the Most Holy Saviour and had a double monastery for both nuns and priests. The king and queen gave her the state demesne of Vadstena for this foundation in 1346. The voice in her visions gave very specific directions about the numbers of nuns who engaged in scholarship and artwork and the priests, deacons and brothers.

Bridget in Rome
To establish a new convent rule Bridget set out in 1349 with her daughter Katarina for Rome to seek papal approval. The Pope at this time was living at Avignon in France. She spent many years at a house in Piazza Farnese, in Rome, given to her by a cardinal. Along with St Catherine of Siena, she worked hard to get the Pope to move back to Rome. Urban V eventually agreed in 1367 and approved the Bridgettine Rule in 1370. She was an outspoken voice against many abuses.

Pilgrimage to Jerusalem
In 1371 Bridget set out accompanied by her daughter Katarina and her two sons on a pilgrimage to Jerusalem. One son Charles died at Naples, but despite many difficulties Bridget and the other two went on to visit the holy places. When they arrived back in Rome early in 1373, she was already ill and died in her house at Piazza Farnese on 23rd July.

Burial and canonisation
Four months later, her children Birger and Katarina brought her remains back to Vadstena. There are many stories about miracles that happened along the road. Pope Boniface IX canonised her in 1391, 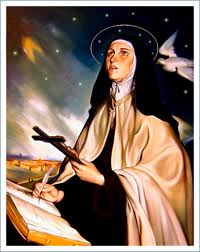 She is the only Swedish saint. In pictures showing her we also see the pen, the ink bottle and the revelations.

After Katarina went with her mother to Rome, she never saw her husband again as he died while she was in Rome. She later became a nun herself and after her mother’s death she was the first abbess of the foundation at Vadstena. In 1484, Pope Innocent VIII recognised Katarina of Vadstena as a saint.

Her abbey of Vadstena quickly became a well-frequented place for pilgrims, and was benefactored by kings and queens up to the time of King Gustav Vasa who introduced Lutheranism to Sweden.

Bridget one of three co-patronesses of Europe
In 1999 Pope John Paul II made her, along with St Catherine of Siena and Sister Teresa Benedicta (Edith Stein), one of three co-patronesses of Europe. He praised her firstly as a laywoman doing charitable work with her husband,  her gifts as a teacher at court  in Stockholm, her pilgrimage to Compostela and then her work as a religious founding an important order.

The spread of the Bridgettine Order
The Bridgettine Order spread to England. A monk of this order, Richard Reynolds (1492-1535) was at Syon Abbey, Isleworth, outside London when Henry VIII broke with Rome and suppressed the monasteries. Along with three Carthusian priors he was hanged, drawn and quartered at Tyburn Tree in London in 1535. The order still has a monastery of nuns at Marley South Brent, Devon, in the diocese of Plymouth, England. Other monasteries are at Uden and Weert in the Netherlands. There are also Bridgettine Sisters in Estonia.

The Swedish branch
The largest branch of the Bridgettine order today is the one that was founded in Rome in 1911 by Swedish convert to Catholicism Elisabeth Hesselblad. It was fully approved by the Holy See on the 7th July 1940 and currently consists of convents in Europe, Asia and North America. The Mother House is in Piazza Farnese, in the house where Bridget once lived. Mother Tekla Famiglietti, who has headed the order since 1979, was among those at the bedside of Pope John Paul II when he died.

The order has been offering to the Catholics and Lutherans living in Rome, as well as to non-Catholic tourists, a place for cult in the Church at Piazza Farnese.