Summary of St Boniface: Born in Devon (England) about 675; died in the Netherlands on this day in 754. A monk and teacher who went to evangelise the Germanic peoples. He was ordained bishop and given wide-ranging papal commissions throughout Germany and Gaul. He founded monasteries and established dioceses, presided at synods, and maintained close associations with various emperors. He was honoured as a determined missionary and as a Church organiser and reformer whose work shaped the future of Europe. He is buried at his abbey of Fulda (near Frankfurt). 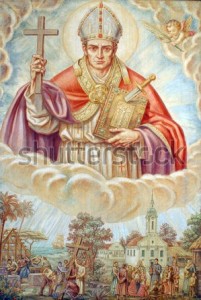 Born and baptised Winfrid about 673 in Crediton, Devon, England, and educated at Exeter, he entered the Benedictine abbey at Nursling near Southampton. As a monk he studied, expounded the Bible and compiled the first Latin grammar written in England. He went to preach the gospel in Holland, Germany and France where he had significant influence in establishing the Church.

Expansion of his mission in north Germany
The Church in Germany had lapsed into paganism and Boniface worked here for a short time until death of the Frisian King Radbod allowed him work among the Frisians alongside his fellow Englishman, St Willibrord (See 7th November). After four years Pope Gregory called him back to Rome and ordained him bishop with jurisdiction over all of Germany, directly dependent on the Holy See. He also gave him letters to Charles Martel, King of the Franks, asking for protection. Martel and his Carolingian successors did indeed afford him support and because of this he was enabled to reorganise the Church in Hesse, Thuringia, and Frisia. 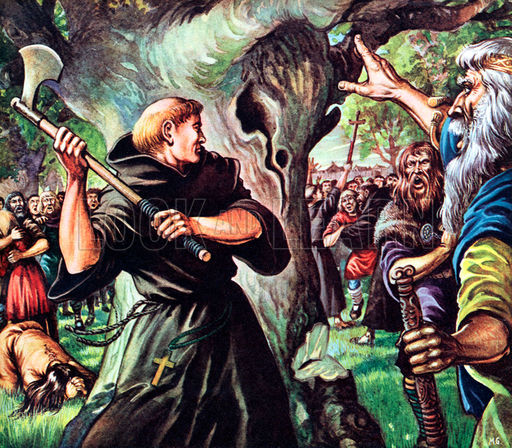 The Thor oak
At the town of Fritzlar in Hesse he came across many pagans prostrating themselves before an ancient tree sacred to the God Thor. To show the people how powerless their gods were, Boniface began to cut down the tree, calling on Thor to strike him down if this was really his holy tree. When Boniface was not struck down, and a mighty wind helped him finish off the job, many of the people converted to Christianity. Probably because of this, tradition has credited Boniface with inventing the Christmas tree. From the wood of the tree he had a chapel built which he dedicated to St Peter.(c/f image right)

Expansion in south Germany
Boniface went to Rome again in 732 and the next pope, Gregory III (731-741), made him an archbishop, giving him Bavaria as a new mission territory. During the next nine years he worked there setting up the dioceses of Salzburg, Regensburg, Freising and Passau, all east of the Rhine and he had his own see as archbishop at Mainz. In 741 through one of his disciples, Sturm, he founded the famous abbey of Fulda. This later became and still is today a meeting place for the German bishops. Boniface appointed his own followers as bishops and in this way tried to maintain independence of the Carolingians. 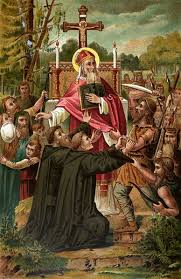 In 754 at the age of eighty, after forty years as a missionary, Boniface set out for Frisia again along the Rhine with fifty-two men: priests, monks, deacons, novices, servants and ten soldiers, desiring to complete the conversion of the Frieslanders. In Frisian territory, he arranged a meeting of converts near the Zuidersee, intending to administer confirmation to them. But just before they arrived, Boniface’s camp at Dokkum was overrun by a hostile force. They slaughtered him and his many companions.

Buried at Fulda
Boniface’s body was taken to Fulda. Although he had enlisted many English men – Saints Lull and Willibald – and women – Saints Walburga and Lioba – to work with him as missionaries, he is much better remembered in Germany than among his fellow countrymen. Many of his letters written in Latin still survive.