Summary: St Bernard of Clairvaux, Abbot, Doctor of the Church. Born near Dijon (France) in 1090; died at Clairvaux on this day in 1153. Joined the impoverished, reformed abbey of Citeaux at the age of 21. Soon became the founder and abbot of Clairvaux and pioneered the reform and expansion of the Cistercian Order. He was honoured as the most influential churchman of his age, for his inspirational leadership, and for his devotion to the humanity of Christ and to the Blessed Virgin. 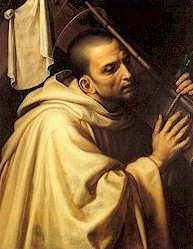 Bernard was a  prolific writer on theology and spirituality, an eloquent preacher, and an adviser of popes and kings, a prominent spiritual master and Church leader in Europe in the first half of the twelfth century and was the power behind the great expansion of the Cistercians at that time.

Early life
Bernard was born at Fontaines, near Dijon, the third of a family of seven children of a noble family in Burgundy, six of whom were boys. At school he had a taste for literature and poetry. He grew into a charming, learned and eloquent young man.

Joins the Cistercians
At the age of twenty-two he joined the newly formed Cistercian monastery of Citeaux, then struggling to restore the Rule of St Benedict in all its rigour. It is said he did not join the popular Benedictine abbey of Cluny because “his own nature was so passionate that it needed stronger medicine”. Along with him he brought thirty-one companions, among them five of his brothers and many relatives. Three years after he joined Bernard himself was sent with twelve monks to start a new foundation at Clairvaux and soon became abbot. 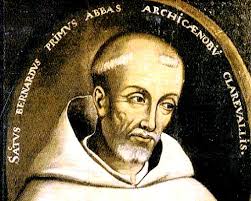 Bernard’s initial regime at Clairvaux was so austere that he himself became ill, and only the influence of his friend William, the bishop of Champeaux, and the authority of the General Chapter could make him mitigate the austerities. The monastery, however, made rapid progress. Disciples flocked to it in great numbers putting themselves under his direction. His father and all his brothers entered Clairvaux so as to pursue religious life. Even his sister, Humbeline, with the consent of her husband, took the veil in a Benedictine convent. In the year 1119, Bernard was present at the first general chapter of the order convoked by Stephen of Cîteaux. It was this general chapter that approved the constitutions of the order (The Charter of Charity), which Pope Callixtus II then confirmed.

In competition with Cluny
At first the monks of the neighbouring abbey of Cluny were unhappy to see Cîteaux take the lead rôle among the religious orders of the Roman Catholic Church. For this reason, the Black Monks attempted to make it appear that the rules of the new order were impracticable. Then Bernard wrote an Apologia or defence of the Cistercian constitutions and soon Cluny began to reform itself under its abbot Peter the Venerable.

Involvement in Church affairs
In the year 1128, Bernard became involved in Church affairs at the Council of Troyes. It was at this council that Bernard outlined the Rule of the Knights Templar, a body of knights who devoted themselves to the care of the sick and pilgrims to the Holy Land and later went there themselves on the Crusades.

Mediation in a disputed papal election
In 1130 Bernard mediated in a disputed papal election and supported Pope Innocent II against a rival antipope Anacletus. He accompanied Innocent to Italy and later mediated in other Church and State conflicts. It wasn’t long before a former pupil of Bernard’s, himself a Cistercian, was elected pope, Eugenius III, in 1145. Perhaps Bernard overdid this involvement in Church affairs (see, for example, the case of St William of York 8th June).

Preaching against heresies: contest with Abelard
At this period a spirit of rationalism was flourishing in the schools of philosophy and theology. To counteract this, Bernard was recruited to confront Peter Abelard, whose treatise on the Trinity had been condemned as heretical. Abelard continued to develop his controversial teachings. Bernard took a more traditional stance and after he spoke at a council at Sens (1141), Abelard submitted without resistance, and retired to Cluny to live under the protection of Peter the Venerable, where he died two years later.

Cistercian Order expansion
By this time Bernard was probably the most influential Church person in Europe. He sent monks from his overcrowded monastery into Germany, Sweden, England, Ireland, Portugal, Switzerland, and Italy. In all sixty-eight monasteries were established from Clairvaux.

Friend of St Malachy of Armagh
About the same time, Malachy, archbishop of Armagh in Ireland visited Clairvaux and developed a close friendship with Bernard. Malachy wanted to become a Cistercian, but the Pope would not give his permission. Malachy did succeeded in getting Bernard to send some Cistercian monks to Ireland and later died at Clairvaux in 1148.

Second Crusade (1146–49)
In 1146 when news came that the Christians in the Holy Land were defeated by the Seljuk Turks, Pope Eugenius III commissioned Bernard to preach the Second Crusade. Although a great gathering of kings and princes went on the Crusade, it turned out to be an unmitigated disaster. Bernard was not left without criticism.

Final years (1149–53)
From the beginning of the year 1153, Bernard felt a great loss at the passing of his friend Pope Eugenius. He grew gradually weaker and died at age sixty-three on August 20, 1153. He was forty years a monk.

Writings
Bernard wrote many works on a variety of topics: the spiritual life, Mariology, the duties of bishops and the question of grace and free will. The best known work is probably his Sermon on the Song of Songs.

Influence
Bernard was canonised by Pope Alexander III in 1174. Pope Pius VII declared him a Doctor of the Church in 1830.