Benedict Joseph Labre is a rare example of what the Russians call a “yurodivy”, a religious wanderer or “fool for Christ”. Born in Boulogne, France, he lived most of his life as a beggar in Rome. He had the reputation that when he was in ecstasy he would levitate or bilocate and even had the ability to multiply bread. He is the patron saint of tramps and the homeless.

A failure at monastic life

Benedict Joseph Labre was born 26 March 1748 near Boulogne, in France,  the eldest child of fifteen children of a prosperous shopkeeper. He was educated privately by his uncle, a parish priest, who died heroically, ministering to, and himself infected by the victims of a cholera epidemic. Benedict tried a number of  monastic communities in France like the Carthusians, Trappists, and Cistercians, but each rejected him as being unsuitable.

A pilgrim beggar
After 1770, when he was twenty-two, he found his real vocation as a pilgrim-beggar – walking to shrines all over Europe. His only possessions, besides the clothes he wore, were two Rosaries, and three books: a New Testament, a Breviary, and The Imitation of Christ. He felt called to be a pilgrim to places of Christian devotion. He repeatedly made known his intention to experienced confessors, who gave their approval.

At the major shrines of Europe 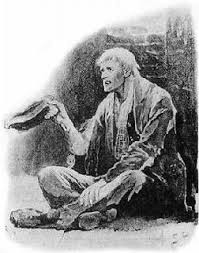 Benedict first travelled on foot to Rome, living as a beggar and then to the major shrines of Europe – to Loreto, Assisi, Naples, and Bari in Italy, to Einsiedeln in Switzerland, to Aix-en-Provence and Paray-le-Monial in France, and to Santiago de Compostela in Spain. He lived on what he was given, and shared what he had with others. He rarely talked, prayed much, and quietly accepted any abuse given him.

In Rome
From 1774 Benedict settled in Rome (apart from an annual pilgrimage to Loreto), sleeping at night in the Colosseum, and spending his days in the churches, especially where there was the Forty Hours adoration of the Blessed Sacrament. Santa Maria dei Monti became his favourite Roman church, and here he became devoted to a fresco of the Madonna and Child with Saints Stephen, Lawrence, Augustine and Francis. Toward the end of his life, when he became seriously ill, he did accept shelter sometimes at a hospice for poor men.

His death
On the Wednesday of Holy Week – 16 April 1783 – Benedict collapsed just outside Santa Maria dei Monti after attending Mass. A passerby carried him to his house nearby. That evening after receiving the Anointing of the Sick, he died. He was thirty-five. A huge crowd thronged his funeral. He was buried under an altar in a chapel of Santa Maria dei Monti, where there is a life-size marble effigy. 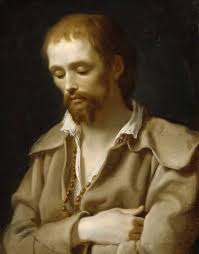 Within a few months of his death, more than 136 miraculous cures ascribed to him were recorded by his spiritual director and biographer, Fr G L Marconi. An American Protestant clergyman, Reverend John Thayer, a native Bostonian, who was in Rome at the time of his funeral, converted to Catholicism and later became a priest and died in Limerick in 1815.

Beatified and canonised
Benedict Joseph Labre was beatified in 1859 by Pope Pius IX and canonised by Pope Leo XIII, 8 December 1881. His feast is celebrated on 16th April.

Image
One portrait was made of him during his life. While the saint was in an ecstasy before an image of our Lady, he was painted by Antonio Cavallucci, and this portrait hangs in the National Gallery, Rome (Galleria Nazionale d’Arte Antica). See image above.