Summary of St Barnabas, Apostle: A Jew from Cyprus and one of the first converts in Jerusalem, a leading member of the Church there, though not one of the twelve. He was honoured as “a good man, full of the Holy Spirit and of faith” (Acts 11:21). He introduced Saint Paul to the twelve and worked with him in Antioch and on missionary work in the Mediterranean world. Championed the Gentiles at the Council of Jerusalem.

Patrick Duffy summarises what the New Testament tells us about him.

Barnabas was probably born in Cyprus. 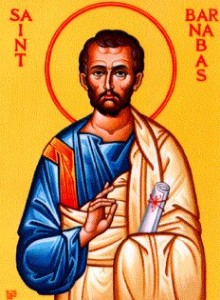 He was one of the first converts in Jerusalem (Acts 4:36) and was sent to preach at Antioch (Acts 11). He was Paul’s companion on his first missionary journey and he took part with him in the Council of Jerusalem.

First appearance
Barnabas, whose name means “son of encouragement” and was said to be a Levite of Cypriot origin, first appears in the Acts of the Apostles (4:36) when he sold a piece of land he owned and brought the money to the apostles for the common purse.

At Antioch and Jerusalem
He next appears at Antioch where he takes Saul under his wing and with him they bring money from the relatively wealthy community in Antioch to aid the much poorer church in Jerusalem (Acts 11:25-30).

First missionary journey with Paul and John Mark in Cyprus and Asia Minor
Back again in Antioch, Barnabas, Paul and John Mark went on a missionary journey to Cyprus (Acts 13:1-12) and from there to Asia Minor, where John left them to go back to Jerusalem and they preached first to the Jews and then to the pagans. Their proclaiming  the good news and their success in healing a cripple had the pagans acclaiming them as gods. Protesting they were only human beings like themselves, Paul and Barnabas were barely able to stop the crowd offering them sacrifice. Then some Jews came to disrupt their successs and stoned Paul, Paul and Barnabas returned to Antioch where they told the church there that God had “opened the door of faith to the pagans” and wasn’t just a god of the Jews (Acts 13:13-14:28).

Should pagans be circumcised?
Tensions then arose in Antioch because a Jerusalem faction was insisting on the necessity of circumcision for all those converting to Christianity, effectively insisting on them becoming Jews. This was debated by the leaders of the Church at what came to be known as the Council of Jerusalem. The decision made was that converts from paganism did need not be circumcised. Paul and Barnabas were delegated to go back to Antioch with this good news (Acts 15:1-35). 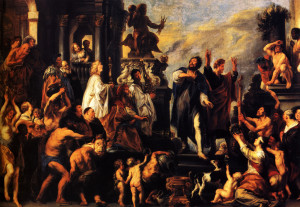 Paul then proposed another missionary journey and Barnabas suggested taking John Mark, but this occasioned a violent quarrel between them. Barnabas sailed with John Mark to Cyprus. Paul recruited Silas and Timothy and went back to Asia Minor (Acts 15:39-40). Paul and Barnabas seem to have been subsequently reconciled and to have worked together again (around 56 or 57 AD) since Paul asks the Christians at Corinth (1 Cor 9:6): “Are Barnabas and I the only ones who must work for a living?” 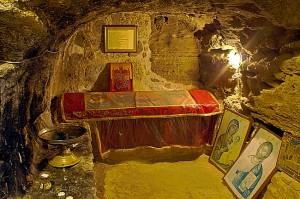 It is not definitely known when he died, but according to Eastern and Western tradition his remains were discovered on this day sometime in the fifth century. Barnabas is thought to have been stoned or burned to death in Cyprus in 61 AD (see image); he was buried on the island near Salamis. There is still today a monastery of St Barnabas and icon museum near Salamis, Famagusta, in North Cyprus.                               The tomb of Apostle Barnabas in Cyprus.