Summary:  St Augustine Zhao Rong and Companions, Martyrs, Diocesan priest Augustin Zhao Rong (1746-1815) is one of 120 people martyred in China between 1648 and 1930. The 87 Chinese include children and parents, catechists and seminarians, and four priests. The 33 Europeans were missionary bishops, priests and religious. Noted for their steadfast faith before their cruel persecution. 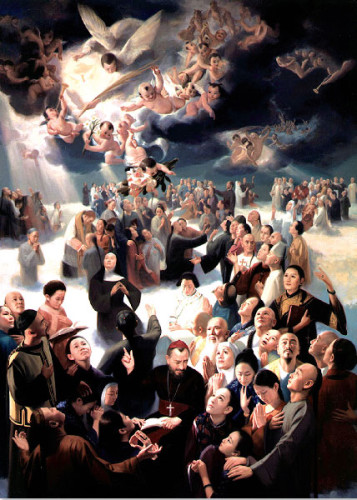 On 1 October 2000, Pope John Paul II canonised 120 Catholics martyred in China between 1648 and 1930. Of these, 87 were indigenous Chinese and 33 were missionaries; 86 died during the Boxer Rebellion in 1900. Three were indigenous Chinese priests – Fr Augustine Zhao Rong, Fr Joseph Yuan and Fr Thaddeus Liu. Others were lay catechists, seminarians, widows and young women, farmers, servants and cooks.

Patrick Duffy looks at the different periods of contact of Christianity with Chinese culture and records some of the details of martyrdoms.

Early attempts to evangelise China
Nestorian Christianity was first preached in China in the 5th century and lasted for about two centuries. A second Christian presence was established during the Mongol times when Franciscan missionary John of Montecorvino (1247-1328) was named archbishop of Beijing but this disappeared after about 40 years when the the Ming dynasty came to power in 1368.

Jesuit Matteo Ricci and the Chinese Rites (16th century)
In 1552, St Francis Xavier died on the island of Shangchuan before he actually reached the mainland of China. Thirty years later the Italian Jesuit priest Matteo Ricci arrived in Macao, then under Portuguese influence, and began learning Chinese. By 1598 he was in Beijing and through his love and respect for Chinese customs as well as his expertise in astronomy and mathematics, he had obtained a position of influence at the Imperial Court.

Some Chinese, influenced by Ricci’s Christian spirit, asked for baptism and became fervent Christians, while preserving their Chinese identity and culture. Christianity was not seen as opposed to Chinese values, but as enriching them with a new dimension. The Jesuits allowed participation in traditional Chinese ritual celebrations in honour of the ancestors.

However, when Pope Clement XI (Giovanni Francesco Albani, 1700-21), prompted by the Dominicans, Franciscans and Augustinians denounced these Chinese Rites as pagan and forbade Catholics to take part, Emperor K’ang Hsi became angry. The result was that some missionaries and faithful lay people were killed, and many churches destroyed. But the Christian presence remained. Ricci died in Beijing in 1610.

First persecutions
In 1648 Manchu Tartars who were hostile to Christianity invaded the region of Fujian and beheaded a Dominican priest Francis Fernández de Capillas, while he recited the Sorrowful Mysteries of the Rosary.

Second wave of persecutions (18th century)
Towards the middle of the eighteenth century another five Spanish missionaries, who who worked in China between 1715-1747, were put to death as a result of a new wave of persecution that started in 1729 and broke out again in 1746. This was in the epoch of the Emperor Yung-Cheng and of his son, K’ien-Lung.

Third wave of persecution (early 19th century, 1805-60)
The third wave of persecution of Christianity took place in the early years of the nineteenth century. While Catholicism had been authorised by some Emperors, Emperor Kia-Kin (1796-1821) published decrees against it. The first was issued in 1805. Two edicts of 1811 were directed against those among the Chinese who were studying to receive sacred orders, and against priests who were propagating the Christian religion.

The following is an account of the martyrs of that period:

The Opium War: reprieve from persecution
Political events towards the end of this period caused a reprieve in the persecution of Christians. In June 1840, the Imperial Commissioner of Guangdong, wishing to abolish the opium trade that was being conducted by the British, had more than twenty thousand chests of this drug thrown into the sea. This was the pretext for war, which was won by the British. When the war came to an end, China had to sign in 1842 the first international treaty of modern times, followed quickly by others with America and France. At this time, France replaced Portugal as the power protecting the missions. And subsequently a twofold decree was issued: one part in 1844 which permitted the Chinese to follow the Catholic religion; the other, in 1846, with which the old penalties against Catholics were abolished.

From then on the Church could more openly carry out its missionary activity, developing it also in the sphere of higher education, in universities and scientific research. Closer links were gradually established between the Church and China with its rich cultural traditions. So this was an era of expansion in Christian evangelising until the period of the Boxer Rebellion (1899-1900), when there was a push for the re-instatement of Chinese values. This resulted in the martyrdom of more missionaries and many Catholic Chinese.

Persecutions associated with the Boxer Rebellion (1900)
The following groups – mostly of the Franciscan family – were martyred at this period and afterwards:

a) The Martyrs of Shanxi, killed on 9 July 1900, who were Franciscan Friars Minor: these were two Franciscan bishops – Bishops Gregory Grassi and Francis Fogolla, two priests – Frs Elias Facchini and Theodoric Balat, and one religious brother, Brother Andrew Bauer.

b) The Martyrs of Southern Hunan, who were also Franciscan Friars Minor: Bishop Anthony Fantosati, and Fathers Joseph Mary Gambaro and Cesidio Giacomantonio, martyred around the same time.

f) Four French Jesuit missionaries and at least 52 Chinese lay Christians: men, women and children – the oldest of them being 79 years old, while the youngest were aged only nine years all suffered martyrdom in the month of July 1900.

Alberic Crescitelli was a priest of the Pontifical Institute of Foreign Missions of Milan (PIME), who carried out his ministry in Southern Shanxi. He was martyred on 21 July 1900.

Two Salesians in 1930
Some years later, two members of the Salesian Society of St John Bosco were added to the martyrs recorded above: Bishop Louis Versiglia and Father Callistus Caravario were killed together on 25 February 1930 at Li-Thau-Tseul.