17 January, 2012
St Anthony. Abbot. Born in 251 in upper Egypt; died in 356. At an early age he gave away his possessions and sought the austere life and solitude in the desert. Yet he remained involved in the theological controversies of his day, defending the divinity of Christ. He attracted disciples who formed communities of hermits. The account of his life by Saint Athanasius (2 May) was extremely influential in the development and spread of monasticism. Honoured as the father of western monasticism. 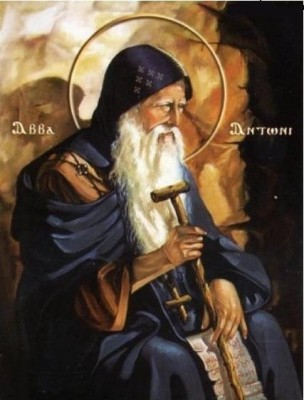 The Life of Anthony, (Abba Antonius (Ἀββᾶς Ἀντώνιος), and Father of All Monks), was written by St Athanasius shortly after his death. It influenced the conversion of St Augustine and St Martin of Tours and became a classic of monasticism in the Middle Ages. Antony lived at first in total solitude but later allowed a monastic community to be formed around him.

Early life
Antony was born in Upper Egypt in 251 to wealthy Christian parents, who died when he was about eighteen. Hearing in church the saying of Jesus in Mt 19:21: “If you wish to be perfect, then sell what you have and give it to the poor and come follow me”, he did just that. He first made provision for the care of his younger sister with a community of nuns and then himself became a disciple to a local hermit. Gardening and the weaving of palm mats became his way of life and his discipline. 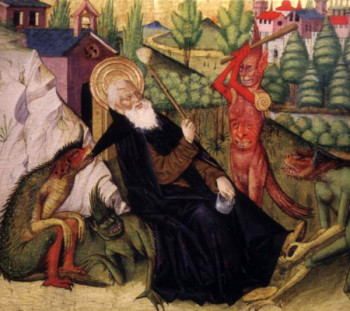 The desert – his demons
For Anthony the real desert was his own personality, where facing his interior demons and overcoming them was victory. According to Athanasius, the devil afflicted Anthony with boredom, laziness, and sexual images; these he overcame by discipline and prayer.  When the devil saw Anthony’s intense ascetic life and devotion, he was envious and beat him mercilessly, leaving him unconscious. Anthony’s friends from the local village came and found him in this condition, carried him to a church where he recovered.

Total solitude
Later Anthony went further out to a deserted fort at Pispir so he could be in total solitude. Here the devil resumed his warfare against him, this time in the form of wild animals who seemed as if they would destroy him. But when he emerged after twenty years (286-306), and people expected him to have wasted away, or gone insane, to their amazement he was healthy, serene, and had a bright light in his eye. 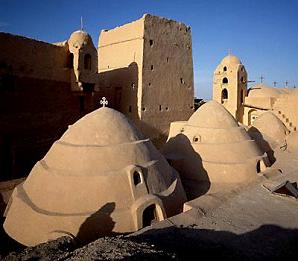 A community nearby
Despite seeking solitude, Anthony understood that discernment and relationship with others in charity were central in the spiritual life. He did not himself create a monastery, but a community grew up nearby him based on his example. Disciples sought him out for “words of wisdom” and those who wished to follow him needed the company of others to survive the harsh conditions.

Emperor Constantine
It is said that the Emperor Constantine wrote to him seeking his prayers. Antony, seeing the surprise of those around him, said: “Do not wonder that the emperor writes to us, a man even as I am; rather be astounded that God should have written to us, and that he spoke to us by his Son.” 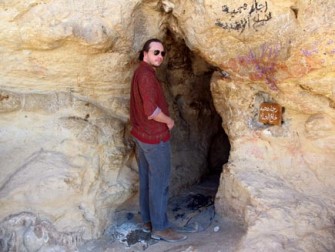 Visit to Paul the Hermit
Anthony knew he was not the first nor the only hermit in the desert. Jerome tells us that shortly before the death of the first hermit Paul (345), Anthony went to visit him. A raven miraculously appeared to supply a loaf for their meal and they engaged in playful conversation. Anthony asked Paul to take him as his companion. Paul urged him rather to go and bring the cloak that Bishop Athanasius had given him. Anthony went out to fetch the cloak coming back as soon as he could, fearing Paul might die while he was out. This indeed is what happened. To help bury Paul, two lions appeared and scooped out a grave with their paws. Antony removed the tunic of leaves Paul had sewn for himself as his garment and buried the holy man in the cloak of Athanasius he had brought. Each Easter and Pentecost ever after he always wore Paul’s tunic. 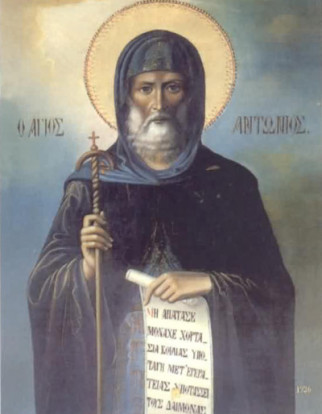