Anthony retired into solitude to live a life of prayer and fasting and converted many back to the faith. He is called the 'Father of monasticism'. 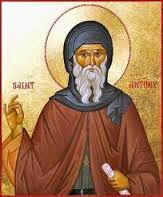 Summary of St Anthony of Egypt is regarded as the founder of the monastic life although he did not create a monastery himself,

Fr John Murray PP profiles him here and gives us some hints how we can follow his footsteps.

Many centuries ago, when people first began to reflect about life, one wise man told a story about a cave and those who dwelt inside it. At the cave’s entrance there was a fire, and those who dwelt in the cave had the fire at their backs with the result that all they saw was their own shadows thrown up on to the wall they faced. This was reality for them: these images without substance, mere shadows.

In time, there were some who had enough courage to look round and realise that the fire caused the shadows; but a lot of darkness remained, and things were not yet clear. Eventually one man went beyond the cave into the daylight, and he saw the sun. Needless to say, he could not maintain his gaze for long, but he came to know that this was what gave light to everything around, and he rejoiced in this knowledge.

Seeing the light
The saints are those who venture out of the cave and look at the sun. They are not afraid of its light. Whereas most people cannot stand too much reality, these men and women know that they cannot stay for ever in the cave with its shadows and false images. Something inside drives them to seek the warmth and light of the sun. St. Anthony of Egypt was one man who was not afraid to venture out of the cave and face reality. There were three key moments in his life when he did this; but first a few details about his life and culture.

Anthony was born in the year 251 at a village near Memphis in upper Egypt. His parents were Christian and well-to-do. When they died – he was only twenty years of age – he found himself in possession of a large estate and with the care of a younger sister. 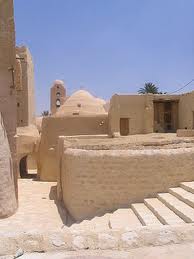 Then came the first moment of reality, when he heard the words of the gospel, ‘Go, sell what you have and give it to the poor and you will have treasure in heaven’. That is exactly what he did. Having seen to the care of his sister, he himself retired into solitude to live a life of prayer and fasting. Anthony is called the ‘Father of monasticism’ and rightly so, for countless millions have followed his example through the centuries.

Council of bishops
A second moment of reality came for Anthony when the bishops of the Church were gathered in the city of Alexandria. Despite the victory of the council of Nicea in AD 325, the Arian cause had grown in strength. This heresy claimed that Jesus was not truly God, but a mere creature.

Anthony, this unlettered man, saw differently, and claimed that the Arians ‘did not differ from the heathens themselves who worshipped and served the creature rather than the Creator’. Even the pagans rejoiced at his wisdom and he converted many back to the faith.

It was not uncommon for the great and the good to seek the advice and counsel of this holy man. In AD 337, Constantine the Great, the first Christian emperor, wrote a letter to Anthony seeking his prayers. Anthony, seeing his fellow monks’ surprise, said, ‘Do not wonder that the emperor writes to us, a man even as I am; rather be astounded that God should have written to us, and that he has spoken to us by his Son’.

Face to face
The third moment of reality in the life of Anthony came at his death. His life had been long – 105 years no less. He had founded monastic settlements, and led many into a committed following of the Lord and Saviour whom he loved. But when the time came for him to die, he slipped away as if he were passing into sleep. He was not afraid. He looked forward to seeing the Son face to face. With his friends gathered round him, he distributed his few possessions, just as he had done eighty years before with the parental estate. ‘Farewell, my children,’ he said. ‘Anthony is departing and will no longer be with you.’ He stretched out his feet, and calmly ceased to breathe. The year was 356, and the date was 17 January.

A space to meet God
Two things I ask you to do as you consider this less well-known Anthony.

Firstly is to think of and pray for those men and women in the convents and monasteries up and down the country. Their way is no escape from life, for these are the people who have emerged from the cave, and they see for real.

Secondly – today – find a space in your life to meet the God who is Reality itself. This may mean rising early in order to pray, or stopping the car in a lay-by for ten minutes after work before heading home. Or it may mean switching off the box and its daily dose of ‘reality’, in order to pray together as a family. Whatever you do, seek to see the sun, and you will be following Anthony, the man who was for real.

This article first appeared in The Messenger (January 2005), a publication of the Irish Jesuits.