Summary: St Angela Merici, Virgin, was born in Desenzano (Italy) about 1474; died in Brescia on this day in 1540. She became a Franciscan tertiary and subsequently founded the Company of Saint Ursula (Ursulines). Her vision provided an alternative to the forms of religious life then available for women: members remained in their own homes, living as virgins and observing a rule she composed. Honoured as a woman of prayer, for her evangelical way of life, for her pilgrimages, and for her creative response to the needs of women in the Church. 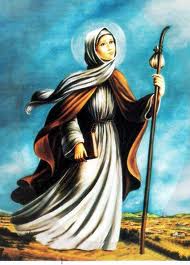 If feminism means promoting the dignity of women, Angela who founded the Ursuline community, can certainly claim to be among the first. Although twenty-five years after her death the Church imposed the cloister, the choral Office and the wearing of the religious habit on her community, the original Ursulines were much more like members of present-day secular institutes.

From Desenzano on Lake Garda
Angela was the fifth of six children born at Desenzano at the south of Lake Garda in Italy. But four siblings died young and were soon followed by the parents. Angela was cared for by the family of an uncle.

One day while Angela was sitting  in the fields, her deceased sister appeared to her telling her that God wanted her to found “a company of virgins“. Angela took the next step she could – becoming a Franciscan tertiary and with other young women forming a support group for unmarried girls, at first in Desenzano. When this was successful, she started another one in nearby Brescia, then a city suffering the chaos of war.

“A social class of virgins”
On her way home Angela was received in audience by Pope Clement VII, who invited her to move to Rome, but she felt her call was to the work she had begun in Brescia. Young women who did not marry or enter a convent had little prospects there other than prostitution or menial service. Angela created “a social class of virgins“, a “company” run almost on military lines under a “virgin-mistress“. They referred the problems they could not handle to four “widow-matrons” or “colonels” chosen from among the aristocracy of Brescia. 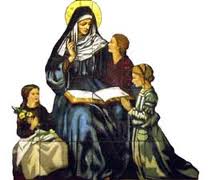 Foundation
In 1535 Angela and some companions moved together into a house near the church of St Afra in Brescia. She became known for having an open house and an open heart. Though initially arousing some enmity, Angela won people over. The women lived either at home or in groups of twos and threes in small houses, praying, fasting and reaching out to help other women with education and training. They also made a commitment to chastity.

Death and influence
Angela died in 1540 and her Ursuline community was approved by Pope Paul III (Alessandro Farnese 1534-49) in 1544. However, in 1572, Pope Gregory XIII (Ugo Buoncompagni 1572-85) at the request of Saint Charles Borromeo, then archbishop of Milan, declared the Ursulines a religious order with enclosure under the rule of St Augustine. It later spread to France, Canada and the United States. Nano Nagle, who had joined them in France for a time, brought them to Ireland in 1771. Today they have houses, colleges and schools in Cork, Dublin, Sligo, Thurles, Waterford and a mission in Kenya.

For information on the Ursuline Sisters in Ireland, see:  www.ursulines.ie