Summary: St Albert the Great, Bishop, Doctor of the Church was born in Lauingen (Germany) about 1200; died in Cologne on this day in 1280. The “Universal Doctor” was a Dominican friar and teacher, most notably in Paris and in Cologne where Saint Thomas Aquinas studied under him. Briefly bishop of Regensburg, but resigned to return to teaching and writing. Noted for the outstanding breadth of his learning in the natural sciences, Jewish and Arabic studies, and Greek philosophy, all of which he brought to the service of his theology.

St Albert was one of the earliest members of the Dominican order, founded in 1216. He played a large part in the intellectual developments of the thirteenth century. He was declared by Pope Pius XII in 1941 to be patron of all those who devote themselves to the natural sciences.

A Swabian German
Albert was born into a wealthy and powerful military family in 1206 at Lauingen on the Danube in the Swabia region of south Germany. At 14 he went to study at Padua in Italy, already a centre noted for scientific knowledge. After two years there he joined the Dominicans against the wishes of his family. After teaching at Hildesheim, Ratisbon  (Regensburg) and Cologne Albert went to Paris, where he obtained his master’s degree in 1248. He was appointed director of the house of studies in Cologne where he had Thomas Aquinas as his student for four years. He became provincial of the Dominicans in Germany for three years 1254-57, and attended the Dominican General Chapter in Paris in 1256.

Universal doctor
Albert is celebrated for the wide range of his interests. He was as well versed in the physical sciences – botany, biology, astronomy, physiology, mineralogy – as well as in philosophy, theology and Scripture, so much so that his contemporaries called him the “universal doctor”. He is noted especially for his efforts to integrate Aristotelian and Arabic science and philosophy with Christian theology at a time when the systems of Plato and Augustine were in favour. He even went to Rome to defend these. 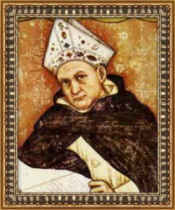 Albert became personal theologian to Pope Alexander IV (1245-61) who appointed him bishop of Regensburg, where spiritual and temporal affairs were in turmoil at that time. After two years, a new pope, Urban IV (1261-4) accepted his resignation and he resumed teaching in Cologne. He attended the second council of Lyons (1274) and played an active role in seeking reunion with the Greek Church. In 1277 he went to Paris to defend St Thomas Aquinas against attacks on him from the bishop of Paris and other theologians. 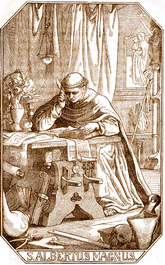 Alzheimer’s disease (?) and death
The following year Albert’s memory failed him, his strong mind gradually became clouded.  Many of his symptoms resemble Alzheimer’s disease. Many sufferers from that disease have begun to look on him as their patron.

His body, weakened by vigils, austerities, and manifold labours, he sank under the weight of years.  He died among his Dominican brethren in Cologne and was buried in St. Andreas’ Church there, which Cardinal Frings gave into the care the Dominicans in 1947.

Albert was beatified in 1622 by Pope Gregory XV. Pope Pius XI canonised him in 1931 and declared him doctor of the Church. Ten years later Pius XII proclaimed him patron of students of the natural sciences.