Home > Saints of the Day > Saints > Jan 1 – SOLEMNITY OF MARY, The Holy Mother of God (Theotokos)

Jan 1 – SOLEMNITY OF MARY, The Holy Mother of God (Theotokos)

Summary: The Blessed Virgin Mary, The Mother of God and the Redeemer. At the Council of Ephesus (451), Mary, the mother of Jesus was proclaimed as Mother of God acknowledging the very Godhead of her Son, Jesus Christ.  Today’s feast invites us to lay our hopes and plans for the new year under her motherly care and patronage 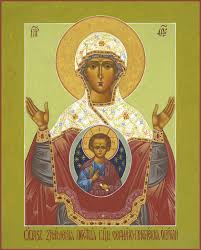 In 431 the Council of Ephesus decreed that Mary is ‘Theotokos‘ (literally “God-bearer“) because her son Jesus is one person, who is both God and man, divine and human. At the Second Vatican Council (1962-65) the bishops decided not to add any new title to or make any new definition about Mary – for example, as “Mediatrix of all graces“, as some of the more extreme Mariologists wanted at the time. Instead they went back to the tradition which saw Mary’s greatness in her act of faith, by which she became “Mother of God”,

The New Eve
At the Second Vatican Council (1962-65) the bishops decided that, rather than defining any special doctrine about Mary, it would be more ecumenical to locate any statement about Mary within the Dogmatic Constitution Lumen Gentium “On the Church” as a special chapter. In this way Mary is presented as the first and foremost of all believers, a New Eve, to reverse the trend to original sin begun by the first Eve.

Lumen Gentium
“The Virgin Mary, who at the

message of the angel received the word of God in her heart and in her body… is acknowledged and honoured as being truly the Mother of God and of the Redeemer…. Rightly, therefore, the Fathers see Mary not merely as passively engaged by God, but as freely cooperating in the work of man’s salvation through faith and obedience…. St Irenaeus says of her in his preaching: ‘the knot of Eve’s disobedience was untied by Mary’s obedience: what the virgin Eve bound through her disbelief, Mary loosened by her faith'” (Lumen Gentium 53 and 56). c/f Pope Francis devotion to ‘Our Lady, looser of knots’.

Mother of the Church

The Roman Catholic church gets this Mary-exalting title of ‘Mother of the church’ primarily from the words of Jesus to John, as He hung from the cross: ‘Behold your mother.’
Pope Paul VI showed his solidarity with this position when he declared Mary Mother of the Church (21-11-1964). And in his encyclical Marialis Cultus (1974) he stated: This celebration, assigned to 1st January in conformity with the ancient liturgy of Rome, is meant to commemorate the central part Mary played in the mystery of salvation. 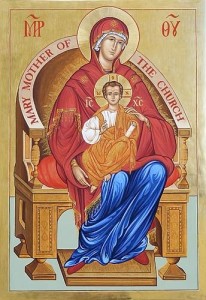 However, one has to acknowledge that today most people are thinking at this time about the end of the old year and the hopes they have for the new. And since the introduction of a Day of Prayer for World Peace, the liturgy of this day can seem a bit overloaded. So culturally this feast of the ‘Theotokos’ may not quite hit the mark or be given the prominence it deserves.

A Central Theme of our Faith
Catholics are proud to hold Mary’s Motherhood of God as a central theme of their faith.

Today we also celebrate our World Day of Peace when we pray for justice and peace for each other and the whole world in the name of our God our loving and common Father.