Patrick Duffy tells us what is known about them.

Pontian: (<<image left) Bishop of his native Rome in 230 but exiled to Sardinia, where he abdicated the papacy during the persecution of the emperor Maximinus in 235. He  succeeded Pope Urban I as pope in the year 230 AD.

During his reign as pope Pontian held a synod which confirmed the excommunication of the great theologian Origen in Alexandria. Pontian was banished to exile by the Roman emperor in 235, and resigned so that a successor could be elected in Rome. n 235. 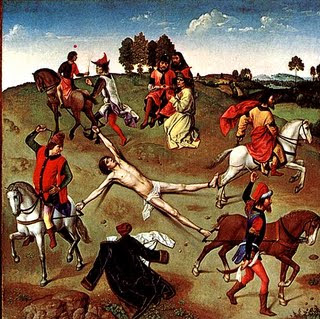 Hippolytus(>>image) was a Roman priest who disagreed with two previous popes over laxity in receiving those who had committed offences.    He was a conservative theologian and presbyter who objected to the teaching of one pope and the election of the next and who, in 217, went into schism. Regarded as the author of the Apostolic Tradition, whose eucharistic prayer forms the basis of Eucharistic Prayer II in the Roman Missal.

He was a presbyter of the church at Rome under Pope Zephyrinus (199–217) and was distinguished for his learning and eloquence. Origen of Alexandria heard him preach there as a young man (212) and was impressed by his eloquence.

Conflict with four popes
Hippolytus came into conflict with Popes Zephyrinus (119-217), Callixtus I (217–222), Urban I (222-230) and Pontian (230–235) whom he accused of christological unorthodoxy and laxity in receiving back those guilty of serious offences and may even have allowed himself to be elected as a rival Bishop of Rome or an anti-pope.

Both Pontian and Hippolitus were exiled by the emperor Maximinus to work in the mines of Sardinia. Pontian abdicated during persecution.  They reconciled together and  probably died there in the same year.

Under the persecution by Emperor Maximin the Thracian, Hippolytus and Pontian were exiled together in 235 to work in the mines of Sardinia, and it is very probable that before his death there he was reconciled to the other party at Rome, for under Pope Fabian (236–250) his body and that of Pontian were brought back together to Rome for burial (Chronograph of 354) indicating both were considered Catholic martyrs. Little is known of Pontian other than he was elected pope in 230 and died in Sardinia in 235.

Hippolytus was said (by Photius, 9th century patriarch of Constantinople) to have been a disciple of Irenaeus and is credited with a number of theological (for example, The Philosophoumena) and liturgical writings (for example, The Apostolic Tradition), which have been argued about by scholars for years. In 1551 on the Via Tiburtina in Rome, a 3rd century statue of him was discovered portraying him seated on a chair, on the sides of which are listed works attributed to him: this is now in the Vatican library. But more recently archaoelgists say that originally this statue was of a woman and was re-used to portray Hippolytus.