Ss John and Paul (Italian: Giovanni e Paolo) are not be confused with the famous apostles of the same name – John the beloved disciple and Paul, the apostle of the Gentiles. Todays feast is of two third century brothers were said to have been martyred in Rome on 26th June under Julian the Apostate (361–3). 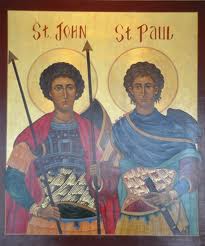 on the Celian Hill in Rome. This icon ( <<left) depicts John and Paul, who supported each other as they were being martyred for their faith.

Acta
According to their Acta, which are legendary and perhaps not very reliable historically, John and Paul were brothers, employed as eunuchs of Constantina, daughter of Constantine the Great, and became acquainted with a certain Gallicanus, who built a church in Ostia. At the command of Julian the Apostate, they were beheaded secretly by Terentianus in the rooms of their own house on the Caelian Hill (362 AD), where they were buried and a church was subsequently erected. A second opinion would date their martyrdom earlier in the reign of Diocletian (304 AD), as the martyrdoms of Julian took place not in Rome, but mainly in the East. 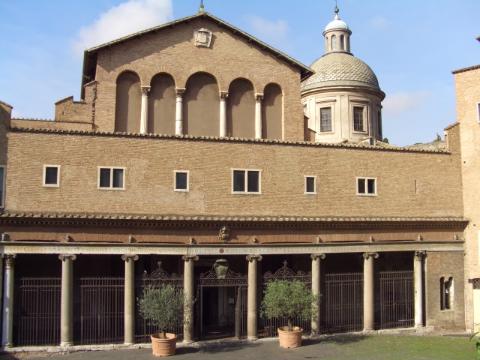 House and Christian basilica on the Caelian Hill
In the second half of the fourth century, Byzantius, the Roman senator, and Saint Pammachius, his son, fashioned the house on the Caelian Hill into a Christian basilica and the tomb of John and Paul was venerated there from as early as the fifth century. The church was damaged during the sack of Rome by Alaric I (410) and because of an earthquake (442), restored by Pope Paschal I (824), sacked again by the Normans (1084), and again restored, with the further building of a monastery and a bell tower.

Rediscovery of the rooms and original tomb
The rooms of the ground-floor of the house were rediscovered in the 19th century under the Basilica of Saint John and Paul by the Passionist Fathers who now have charge of the Basilica. They are decorated with important and interesting frescoes, while the original tomb (confessio) of Ss John and Paul is covered with paintings of which the martyrs are the subject. The rooms and the tomb form one of the most important early Christian memorials in Rome.

Names in the Roman Canon and Sacramentarium Veronense
John and Paul’s early veneration is also indicated by the fact that the names of the two saints were inserted into the Roman Canon (First Eucharistic Prayer) of the Mass. Also the Sacramentarium Veronense, which dates back to Pope Leo the Great (440-461, indicates in the preface to the feast of the saints that they rested within the city walls.

Honoured at Venice
Besides the Basilica of Santi Giovanni e Paolo in Rome, the Basilica di San Zanipolo in Venice (“Zanipolo” being Venetian for “John and Paul”) is dedicated to them.

Home to the Passionists and link with New York
Since 1773 theBasilica of St John and Paul has been home to the Passionist Order and is the burial place of its founder St. Paul of the Cross. The present cardinal priest of the basilica is Edward Egan, archbishop emeritus of New York. Among previous cardinal priests of this church are two who became pope: Pope Honorius III (Cencio Savelli, elevated to cardinal in 1198) and Pope Pius XII (Eugenio Pacelli, elevated to cardinal in 1929). Since Cardinal Francis Spellman received the red hat in 1946, the title has been held by the archbishop of New York. 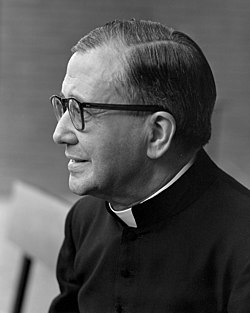 José María Mariano Escrivá y Albás was born to José Escrivá y Corzán and his wife, María de los Dolores Albás y Blanc on 9 January 1902, in the small town of Barbastro, in Huesca, Aragón, Spain, the second of six children and the first of two sons. José Escrivá was a merchant and a partner in a textile company that eventually went bankrupt, forcing the family to relocate in 1915 to the city of Logroño, in the northern province of La Rioja, where he worked as a clerk in a clothing store.Young Josemaría first felt that “he had been chosen for something”, it is reported, when he saw footprints left in the snow by a monk walking barefoot.[11][12]

With his father’s blessing, Escrivá prepared to become a priest of the Catholic Church. He studied first in Logroño and then in Zaragoza, where he was ordained as deacon on Saturday, 20 December 1924. He was ordained a priest, also in Zaragoza, on Saturday, 28 March 1925. After a brief appointment to a rural parish in Perdiguera, he went to Madrid, the Spanish capital, in 1927 to study law at the Central University. In Madrid, Escrivá was employed as a private tutor and as a chaplain to the Foundation of Santa Isabel, which comprised the royal Convent of Santa Isabel and a school managed by the Little Sisters of the Assumption.

Josemaría Escrivá de Balaguer y Albás (1902-1975) founded Opus Dei, an organization of laypeople and priests dedicated to the teaching that everyone is called to holiness by God and that ordinary life can result in sanctity.

Escrivá gained a doctorate in civil law at the Complutense University of Madrid and a doctorate in theology at the Lateran University in Rome. His principal work was the initiation, government and expansion of Opus Dei. Escrivá’s best-known publication is The Way, which has been translated into 43 languages and has sold several million copies.

Escrivá hinself and Opus Dei have aroused controversy, primarily concerning allegations of secrecy, elitism, cult-like practices, and political involvement with right-wing causes, such as the rule of Francisco Franco in Spain (1939–1975).

After Josemaría’s death, his canonization attracted considerable attention and controversy, by some Catholics and the worldwide press. Several journalists who have investigated the history of Opus Dei, among them Vatican analyst John L. Allen, Jr., have argued that many of these accusations are unproven or have grown from allegations by enemies of Escrivá and his organization.

Cardinal Albino Luciani (later Pope John Paul I),] John Paul II, Benedict XVI, Francis, Óscar Romero, and many Catholic leaders have endorsed Escrivá’s teaching concerning the universal call to holiness, the role of laity, and sanctification of ordinary work. According to Allen, among Catholics, Escrivá is “reviled by some and venerated by millions more”