Summary : Cyril and Methodius:These were two brothers from Thessalonica in Greece who became apostles of the Slavs, translated the Scriptures and indigenised the liturgy for the Slav people. In 1980 they were named by Pope John Paul II along with St Benedict as co-patrons of Europe. Slavic peoples celebrate these two saints with a national holiday. 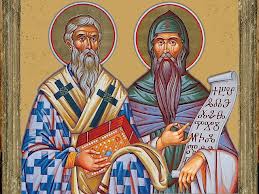 Cyril (827-869) and Methodius (825-885) were the evangelisers of the Slavs. They translated the Bible into the Old Church Slavic language and, against all the odds, created an indigenous Slavic liturgy.  They invented an alphabet (first called Glagolitic and later, after some modifications, Cyrillic) that is today used for Russian, Ukrainian, Bulgarian, and Serbian. Pope John Paul II considered these two saints such pillars of civilisation that in 1980 he proclaimed them “co-patrons of Europe” along with St Benedict and five years later wrote an encyclical letter Slavorum Apostoli commemorating their work. In hindsight after the collapse of Communism in Eastern Europe, we can now appreciate the prophetic nature of his action. 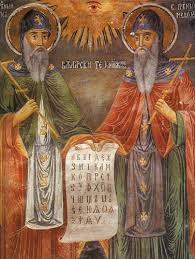 Born in Thessaloniki of a Greek military-officer father and a Slavic mother, the brother’s upbringing was multi-cultural. As their father died young, their uncle Theoctistes, who was responsible for the postal services and the diplomatic relations of the Byzantine empire, brought them to Constantinople. Cyril studied philosophy and theology at the university under Photius who later became Patriarch of Constantinople, while Methodius was placed as a commander of a Slavic administrative region of the empire. Both were gifted scholars and linguists.

After his education Cyril was ordained and became a monk. Soon he was teaching philosophy and theology and held the important position of chartophylax (keeper of the archives) and secretary to the patriarch. The fact that he was both a linguist, having learned Arabic and Hebrew, and a theologian led to his being sent first on a diplomatic mission to discuss the Trinity with Abbasid Caliph in Baghdad and later on a missionary expedition to the Khazars in the Crimea.

Meanwhile Methodius had moved through the administrative and political ranks of the Byzantine empire to become a monastic abbot.

Missionaries and inculturation conflict
In 862 the Emperor Michael III (842-867) and the Patriarch Photius received a request from Prince Rastislav of Greater Moravia (a territory that covers present day Czech Republic, Slovakia and parts of Hungary) to send missionaries to evangelise his Slavic people. Rastislav had already had some intrusion from German missionaries and was anxious for support from Constantinople to keep his kingdom independent. He also wanted a teacher who could instruct his people and celebrate the liturgy in the Slavonic language. The brothers Cyril and Methodius were entrusted with the task. 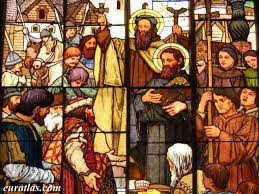 They began their preparation by training assistants and translating the bible into the language that is now known as Old Church Slavonic. They then travelled to Greater Moravia to promote it, but came into conflict with German clerics (Archbishop Theotmar of Salzburg and Passau) firstly because they came from Constantinople which had a reputation for schism but also because of their efforts to create a Slavic liturgy.

Journey to Rome
As a result of this conflict, Pope Nicholas I (858-867) invited the brothers to Rome but he died before they arrived. His successor Adrian II (867-872) warmly received them and approved their project of a Slavic liturgy in Moravia. Pope Adrian also decided to ordain Cyril and Methodius bishops, but Cyril died in Rome on 4th February, 869 and did not return to Moravia. 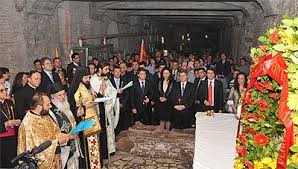 In the lower Basilica under San Clemente on Via Labicana  Rome, which is cared for by the Irish Dominicans, there is a chapel to Cyril and Methodius and in the 4th century basilica underneath there is an altar to St Cyril under which it is possible that his relics lie.  (A legend tells that St Clement had been exiled to the Crimea by the emperor Trajan and was drowned there tied to an anchor, that Cyril found his relics there while on his way to evangelise the Khazars, kept them and brought them to Rome to ensure a good reception for himself and that Pope Adrian II placed them in the high altar. (Unlikely, but there you have it!)

Second mission and more conflict
Pope Adrian II set up an archdiocese of Moravia ( = Czech Republic and Slovakia) and Pannonia (= Eastern Austria through Western Hungary to the River Danube) at the request of the Moravian princes, Rastislav and Svatopluk, and the Slav Prince Kocel of Pannonia and appointed Methodius archbishop. In 870 King Louis and the German bishops summoned Methodius to a synod at Ratisbon in Germany where he was deposed and imprisoned for three years. The next pope, John VIII (872-882), sent a personal representative to demand his liberation. He was immediately released and reinstated and continued to spread the faith among the Bohemians and the Poles in Northern Moravia.

Soon, however, he was called to Rome again to answer allegations of unorthodoxy brought against him by a German priest, Wiching.  Again, he was vindicated and the Slavonic liturgy approved, but with a new requirement that at Mass the Gospel should be read, first in Latin, and then in Slavonic.

Wiching, in the meantime, had been nominated as one of the suffragan bishops of Methodius and continued to oppose his metropolitan. Methodius then returned to Constantinople where, with the help of several priests, he completed the translation of the Bible into Slavonic. Worn out by his long struggle and with no let-up in the antagonism of his opponents, he died on 6th April, 885.

Subsequent and present day influence
Methodius’s influence in Moravia was wiped out after his death but was carried on to Bulgaria, Serbia, and Russia, where the southern Slavonic language of Cyril and Methodius is still the liturgical language of both the Roman Catholic and Orthodox churches. The Cyrillic alphabet used in those countries today, traditionally ascribed to St. Cyril, was probably the work of his followers. It was based on the Glagolithic alphabet used by Cyril himself and still used by certain Croatian and Montenegrin Catholics.

Both brothers were canonised in Eastern Orthodoxy as “equal-to-apostles” and were included in the universal Roman Catholic Church Calendar by Pope Leo XIII in 1880.

Patrons of indigenisation of the Christian message and liturgy 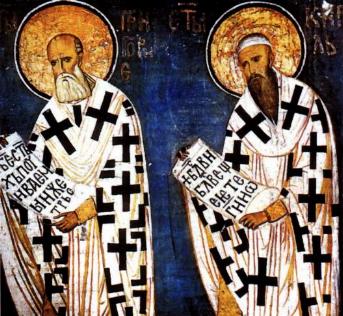 Since their inculturation of Christianity was so successful in Eastern Europe and they were well received in Rome, it is easy to see how they have become not just pillars of European solidarity, but also patrons of indigenisation of the Christian message and liturgy in all the cultures to which it is brought.