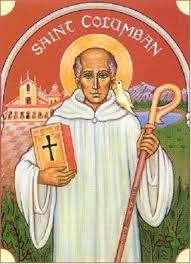 Eugene Ryan writes about St Columban (543-615) and his contribution to Europe. Robert Schumann, founder of the EU, said of Columban that he was “the patron saint of all those who now seek to build a United Europe”.

Standing on the shore of the Island of lona, Lord Clark, the great historian of Western civilisation, said: “It was from here that the Irish monks set out to rekindle the lamps of western civilisation that had become extinguished all over Europe”.

End of the world
He was speaking of a time Europe was in a dark age. The Roman Empire had collapsed. The barbarian hordes had destroyed and looted everything in their path. To all reasonable people looking at the situation, the end was no longer in doubt – their world was in its last days. They could see no hope for the future. But hope would come from the most unlikely place, from an island at the western edge of Europe, an island that had escaped the ravages of the barbarians and had kept alive that faith and civilisation which was being destroyed in continental Europe. 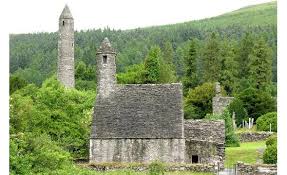 In the sixth century monastic settlements were the great centres of learning. It was from them that the monks set out to “journey for Christ” across Europe. The leader and the most influential of this missionary movement was Columban. In his day people generally lived and died in the place they were born. They rarely travelled more that! ten miles from home but not St. Columban. He was one of the most travelled men of his age, crisscrossing at least five countries of mainland Europe. 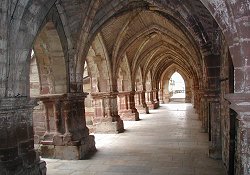 A Columban monastery in Europe

Monasteries were the universities of that time, so the influence of St Columban on western civilisation may be judged from the following quotation from the historian Thomas Cahill: “At this great distance in time, we can no longer be sure exactly how many monasteries were founded in Columban’s name during his lifetime and after his death. But the number, stretching across vast territories that would become in time the countries of France, Germany, Switzerland and Italy, cannot be less than sixty and may be more than a hundred.”

Common faith and values
In 1950 during the fourteenth centenary celebration in France of the birth of St Columban. Mr John L Brow who was representing the American Ambassador in Paris said in his address: “St. Columban would not have been out of place among the rugged and courageous men who colonised our Far West. But much more precious for us are those achievements of his which symbolise the unity of a civilisation, formed amid diversity, on the foundation of a common faith and common moral values.”

The best-known speaker to address the Congress was Robert Schumann, Prime Minister and later Foreign Minister of France, the man credited with being the founding father of the EEC. In his address he said:

“St. Columban, this illustrious Irishman who left his own country for voluntary exile, willed and achieved a spiritual union between the principal European countries of his time. He is the patron saint of all those who now seek to build a United Europe”.

This article first appeared in Far East (Nov 2001), a publication of the Missionary Society of St Columban.