Summary: St Pius X, Pope. Born Giuseppe Sarto at Riese (Italy) in 1835; died at Rome on 20 August 1914.  Noted for his love of poverty and for his promotion of liturgical participation, especially of frequent communion, to which he admitted young children.

A peasant by background, his motto as pope was a pastoral one – instaurare omnia in Christo – “to restore all things in Christ“.

Early life
Born Giuseppe Melchiorre Sarto, the son of a village postman in Riese, Treviso, in the Veneto region of northern Italy in 1835. Though poor, his parents valued education, and Giuseppe walked 6 kilometres to school each day. After learning Latin from the local priest and winning a scholarship for his secondary education, he completed his studies in the seminary at Padua, and was ordained priest at the age of 23. After serving as chaplain, parish priest, chancellor and spiritual director in the seminary, he was ordained bishop of Mantua in 1884 and became Cardinal Patriarch of Venice in 1893.

Elected pope 1903
Although it was expected that Cardinal Rompolla, the secretary of State to the late Pope Leo XIII would be elected pope, during the conclave the Polish Cardinal Jan Puzyna de Kosielsko from Krakow announced that the Emperor Franz Joseph (1848–1916) of Austria-Hungary would exercise a veto. Although the electors resented this interference, the outcome was that Giuseppe Melchiorre Sarto was elected pope and took the name Pope Pius X, probably linking himself with Pope Pius IX as a conservative pope. In pursuit of his motto, “to renew all things in Christ”, he initiated reforms of the liturgy and of canon law and took stern measures against “modernist” trends in theology. His efforts to avert world war were frustrated. 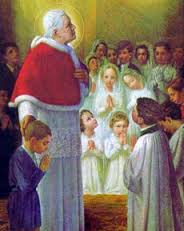 A pastoral papacy
Pius was a pastoral pope The first fruits of his pontificate were a number of liturgical reforms – the Breviary, The Mass, Gregorian chant, more frequent reception of Holy communion and a more active participation of the faithful in the liturgy. Pius also introduced a new Catechism, preached himself every Sunday and ordered the reform of the Code of Canon Law, which was eventually promulgated in 1917 after his death.

Anti-modernist
Pius X was rather intransigent towards every form of liberalism and introduced an anti-modernist oath for all candidates for ordination. He was adamant in preserving the separation between Church and State and forbade clergy to be involved in politics.

Against mixed marriages
In 1908 the papal decree Ne Temere came into effect which complicated mixed marriages. Marriages not performed by a Roman Catholic priest were declared  invalid. Priests were given discretion to refuse to perform mixed marriages or lay conditions upon them, commonly including a requirement that the children be raised in the Catholic faith. (This decree proved particularly divisive between Catholics and Protestants in Ireland.)

Death and canonisation
Pius died with a reputation for sanctity during the early days of World War I on 20 August 1914. He wrote in his will: “I was born poor, I have lived poor and I wish to die poor.” He was canonised by Pope Pius XII in 1954.