Summary: St. Columbanus, one of the early Irish monks who helped evangelize, educate, and transform pagan Western Europe. (This article came to us at www. catholicireland.net as a unsolicited response to our items on St Columbanus.  Thanks to the supplier!)

St. Columbanus (Columban) was an Irish monk who was born about 543 AD in County Meath, now known as Leinster. While his mother was pregnant with him, she dreamed of a great light that spread throughout the world. She knew that her baby would be a servant of Christ.

It was written soon after his death that “Columbanus’s fine figure, his splendid color, and his noble manliness made him beloved by all.” He also had a great sense of humor and loved puns. We know about Columbanus from the writings of The Venerable Bede in the fifth chapter of his Ecclesiastical History of the English People and from Jonas, a monk  of Bobbio who wrote about Columbanus three years after he died.

As a young man, Columbanus was afraid he was on the brink of giving in to the vain “lusts of the world,” so he sought the guidance of a local female hermit or Abbess. She advised this handsome young man: “Away, O youth, away!”  “Flee from corruption, into which, as you know, many have fallen.” Hearing those words of admonition, he was shaken so much that he left home over his Mother’s loud protest as she lay prostrate on the threshold of their home, begging him not to leave to study under a monk named Sinell on Cleenish Island in Lough Erne.

He later entered the famous Irish monastery of Bangor and studied with the renowned St. Comgall (a friend and student of St. Columba of Iona). While there he codified two Rules for living in community, one for the community and one for individual monks. When Columbanus was about 50 years old, Comgall finally gave him permission to go to Europe with twelve companions in about 589.

They landed first in Saint Malo, Brittany in France and then Columbanus set up a monastery at Annegray in the Vosges Mountains on an old Roman fort in Burgundy.

St. Columbanus founded numerous monasteries throughout Europe, most notably Annegray and Luxeuil in  France and Bobbio in Italy. At Luxeuil, his largest monastery in France, the Basilica of Saints Peter and Paul stands on the site of Columbanus’ first church.

It is even said that he had his own personal retreat in a bear’s den!  Columbanus was very well educated and became quite popular with the French royalty and even St. Burgundofara (see Day 21 of Celts to the Creche), the first Abbess of Faremoutiers who was blessed as a child by Columbanus when he visited in their home.

All of Columbanus’ monasteries that he established and/or influenced followed Celtic customs and the Celtic calendar. His strict and severe Rule of Columbanus that was based on the Celtic way of monastic living and penitentials was later moderated by a mix with the kinder, gentler Rule of St. Benedict.

Speaking His Mind with the French Royals
When King Theuderic II of Burgundy, France began living with a mistress and having illegitimate children, Columbanus  boldly objected, earning the displeasure of the king’s grandmother, Brunhilda.  Angered by the saint’s moral stand, Brunhilda stirred up the bishops and nobles to find fault with Columbanus’ monastic rules.

When Theuderic II finally confronted Columbanus at Luxeuil, ordering him to conform to the country’s conventions, the saint refused and was then taken prisoner to Besancon. Columbanus managed to escape his captors and returned to his monastery at Luxeuil. When the King and his grandmother Brunhilda found out, they sent armed soldiers to Nantes to deport  him back to Ireland by force.

Exile that Turned for Good.
His ship of deportation was prevented from setting sail as a storm came up, so Columbanus rowed up the Rhine River desiring to settle at Lake Constance, but there was opposition to him there also. His companion, St. Gall who had come with him from Bangor, Ireland remained in Switzerland and it seems they may have gotten “sideways” with each other. St. Gall stayed in Switzerland as a hermit and a large monastery and community grew up in that area bearing his name, St. Gall. Many Irish came to the monastery at St. Gall and it accumulated a large collection of early manuscripts, some with Irish poetry scribbled in the margins.

Columbanus ended up in  northern Italy where in 613, he established the famous monastery of Bobbio on the site of a ruined church in the foothills of the Appenines. Bobbio became famous for its scriptorium and its vast library of manuscripts.

His Place of Resurrection
His last years were spent copying manuscripts and writing sermons. This wanderer for Christ, Columbanus died at Bobbio on November 21, 615 AD. On his deathbed, he sent his abbot’s staff as a token of forgiveness and reconciliation to  one of his former twelve companions, St. Gall whom he had a falling out with earlier. 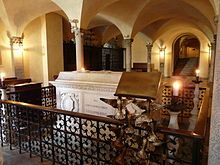 The sacristy at Bobbio possesses some of Columbanus’ relics. These relics include a portion of his skull, his knife, wooden cup, bell, and an ancient water vessel formerly containing sacred relics and said to have been given to him by Pope Gregory I. His tomb can also be found  in the Cathedral.

Influence
Columbanus’ Celtic love of nature and God’s creation influenced St. Francis who lived for awhile at Bobbio Monastery.  As Columbanus walked in the woods, it was not uncommon for birds to land on his shoulders to be caressed, or for squirrels to run down from the trees and nestle in the folds of his cowl. He is often shown with a bear because of two stories. One is that the monks at Luxueil Abbey found themselves shorthanded at planting time. Columbanus went into the woods, rounded up a bear, and yoked him to the plough. Another time later in his life, Columbanus wanted a quiet hermitage away from everything. He found a nice den in a mountain but discovered it had a bear in it, so her persuaded the bear to leave and let him have it.

Only three years after Columbanus died on November 21, 615, one of the monks of Bobbio, Jonas wrote the Life of Columbanus revealing that he was a scholar, poet, and a mystic. He founded or influenced the establishment of sixty monasteries in Ireland and Western Europe. His Rule of Columbanus was the rule that many Irish and European monasteries followed for many years that was later moderated by the less severe Rule of Benedict.

Six letters of his survive including correspondence with Pope Gregory I and Pope Boniface IV. At least thirteen sermons and five poems of Columbanus have also survived throughout the ages. Online links to Columbanus’ sermons, letters, autobiography, and the Rule of Columbanus are listed below.

Columbanus’ Places of Ministry. From MonasticIreland.com

Jonas of Bobbio. Life of Columban.  From Fordham University. (note: Book I is about Columbanus and Book II is about his disciples).

Lack, Katherine. The Eagle and the Dove: The Spirituality of the Celtic Saint Columbanus. London: Society for Promoting Christian Knowledge, Triangle Press, 2000.

Mitton, Michael. The Soul of Celtic Spirituality in the Lives of Its Saints. Mystic, CT: Twenty Third Publications, 1996.

Moore, David. The Accidental Pilgrim: Travels with a Celtic Saint.T Dublin: Hodder, 2004. (a bicyclist on a pilgrimage to the places of Columanbus-a great read!)

O’Fiaich, Tomás. Columbanus in His Own Words. Dublin: Veritas Publications, 1990.

The Rule of Columbanus. (from CELT: Corpus of Electronic Texts)

The Rule of Columbanus (from Scroll Publishing)