This month (September), I have been thinking about Helen. Not Helen of Troy, whose beauty launched a thousand ships and made even Brad Pitt want to capture her! The Helen I am thinking of was the mother of an emperor and a woman the Church later popularly regarded as a saint. 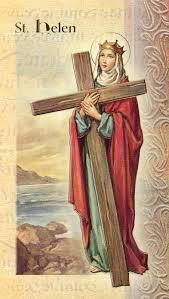 It is the stuff of legend, and not every detail can be regarded as certain, but the story goes roughly like this. After Jesus had returned to the Father and the Church began its first few nervous steps outside Jerusalem, there was persecution. It didn’t happen all at once or all the time, but over the next couple of centuries many thousands died. Even pagan historians, like Tacitus, tell us of the cruelty inflicted on the Christians by emperors like Nero around the year AD 64.

Constantine – a successful general and leader – had a Christian mother, called Helen. No doubt she influenced him, but he remained a pagan and unbaptised, a politician who sat happily on the fence. Then, in the year 312, the story goes that he had a dream before an important battle, in which he saw a cross in the sky and the words, ‘In this sign you will conquer’.

At once he emblazoned the sign of the cross on his soldiers’ shields, and won the battle just outside Rome. He became the first Christian Emperor and, after decades of persecution, Christianity became safe and secure and – some would say – began to lose its cutting edge.

Helen, no doubt, had been brought up with the legends and the wonderful stories of the martyrs. She would have heard how Ignatius, before being fed to the lions in the Colosseum, wrote happily to the Roman Christians that he would be ‘ground by the teeth of the beasts to be made pure bread for Christ’. She would have known of the courageous maiden, Blandina, who was gored to death by a bull in the amphitheatre in Lyons in 177. She would have remembered the brave martyr and writer, Justin, and Pope Sixtus, beheaded in 165. And many others. They were stories to stir the heart and make one want to follow them, for Jesus’sake.

As the years followed her son’s victory in 312, Helen saw the Church becoming soft and flabby, no longer focused on the cross of Christ, making excuses for sin, no longer a leaven in society. It even began to be safe and profitable for some to be a Christian in this world.

The legend says that in 326 – just a year after the great Council of Nicea which defended the divinity and humanity of Christ against the heresy of Arius – she raised an expedition to search for the lost cross of Jesus in Jerusalem. Tradition has it that she was successful, and that she restored it to a new basilica built in Jerusalem by her son, the Church of the Holy Sepulchre.

Not everyone in the long history of Christianity understands or appreciates the place of relics in the Church. In his play, Luther, John Osborne has Martin Luther poke fun at the over-emphasis on sacred things at that time in the early sixteenth century: ‘a scrap of swaddling clothes, eleven pieces from the original crib, one wisp of straw from the manger, as well as the remains of the loaf at the Last Supper’. Critics weren’t slow to point out that if all the slivers of the ‘true cross’ were assembled, there would be enough wood to build a large ship!

Yet, I think Helen was less concerned about the value of the relic than the place of the cross in the life of the Church. Would she be just as concerned if she were to search for the ‘lost cross’ in Ireland? Ireland is no longer the land of the Penal days, with hunted priests and Mass rocks in the glens, the island of saints and scholars. It is the land of the Celtic Tiger and moral relativism. Many would say that as a nation we have become soft and flabby, like the Church of Constantine.

On Good Friday this year, for instance, out of the hundreds of television programmes on offer for Irish and British viewers, there was only one to remind us that this was one of the most important days in the history of the world!

Perhaps there is a second reason Helen discovered the cross and restored it to its place at the heart of the Church. The age of martyrdom was over, at least for the time being, though it would return again and again in many parts of the world throughout the next two thousand years.

But men and women continue to suffer: in illness and disease, through life’s frustrations and disappointments, at the hands of others, and because of their own sin. By ‘looking on the One whom they have pierced’, generations have drawn strength and grace to carry on, to bear the cross, to walk with Christ. Did not the late Pope John Paul teach us that by his dying, as well as by his inspiring life? When he could no longer speak a word, he preached a most eloquent sermon by his silent suffering. 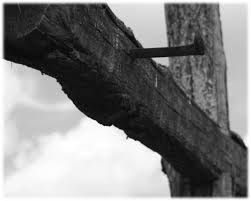 Exaltation of the Cross

I haven’t said a lot about Helen herself. Really, not much is known, other than that she travelled extensively and saw to it that churches were built in Rome and Constantinople, Bethlehem and Jerusalem. She was determined to avail of the new-found freedom that Christians were enjoying under the direction of her son. We do know that she died about 330, for her image ceased to appear on coins after that time.

Helen would no doubt be glad that the focus is not on her, but on the cross. The Church today doesn’t expect Catholics believe every detail of her story, but she would be happy to know that we celebrate a feast called ‘The Exaltation of the Cross’ on 14 September every year, and that every time we pray we begin with the sign of the cross. Her son’s dream has come true, in a deeper way than he could ever have expected: ‘In this sign you will conquer.’

This article first appeared in The Messenger (September 2005), a publication of the Irish Jesuits. c/f www.messenger.ie/bookshop