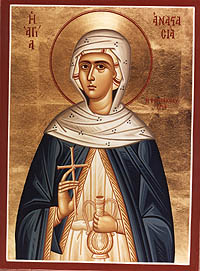 Anastasia did many good deeds of generosity and worked many wonders before she herself was burnt to death.  The name means “resurrection”: we pray it is a symbol of the transformation of such people’s lives. The Natashas is a book about the international sex trade.

John Murray is the author of this piece.

Anastasia was a Roman lady of noble descent. Her father was an opulent and noble pagan, but her mother, who was a Christian, caused her to be baptised in her infancy, and secretly reared her as a follower of Christ. She was born during the third century, at a time when the Roman Empire was about to unleash all its venom against an emerging Christian Church.

Marriage and persecution
When Anastasia was older, she was married off to a noble Roman named Publius, who was a pagan. Initially, he loved his wife a lot, but having discovered her Christian acts of piety, from a loving husband he became a cruel tyrant. He confined her to the house and treated her like a slave, such was his hatred for the newly emerging Christian faith.

Having been appointed Ambassador to the King of Persia by the Emperor, Publius gave permission to his domestics to mistreat his wife during his absence. Publius met with an untimely death on his journey, however, and Anastasia was able to resume her work for those who were suffering for the faith.

Anastasia occupied her time in consoling and succouring the Christians, particularly those who were in prison, whom she exhorted to suffer for the faith. It was indeed a time of great trial for the young Church, and many thousands found themselves in prison, their only crime being their following of Christ. 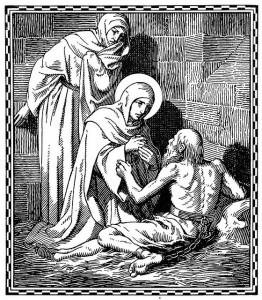 Having heard of the arrest of St. Chrysogonus, she hurried to his prison, and considered herself fortunate in being able to be of service to him in his trial. He had been in prison for one year, using his time to instruct his fellow prisoners who were Christians and to introduce many pagans to the faith. Anastasia gave him as much assistance as she could. St. Chrysogonus was beheaded, however, by order of Diocletian, on 24 November in the year 303.

Anastasia continued her mission to the prisoners. One day, as she went about an errand of charity, she found that all the holy confessors had been butchered by order of the Emperor, and she wept bitterly. When officers of the court asked why she wept, she replied, ‘I weep because I have lost my brethren, who have been cruelly put to death’. 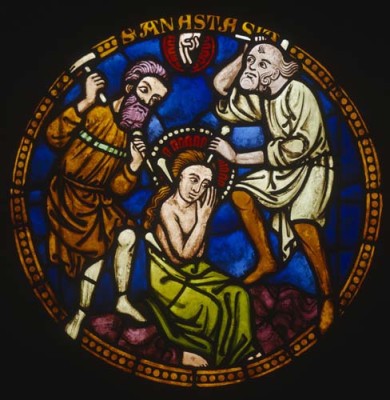 Anastasia being tortured was finally martyred sometime between 290 and 304AD

She, in turn, was arrested and brought before the prefect, Florus, who got no satisfaction from her defence, and so he sent her to the emperor Diocletian. Diocletian was unsuccessful in exhorting her to abandon a religion which was proscribed throughout the Empire, and so he sent her back to the prefect Florus. He sent her to the principal priest of the Capitol, Upian, in the hope that the latter could convince her to sacrifice to the gods. Upian, having used all his arts of persuasion in vain, said to her, ‘Now I shall give you but three days to decide’. Anastasia replied, ‘They are three too many; you may imagine them already past. I am a Christian, and am anxious to die for Jesus Christ. From me you shall never get any other answer’.

Upian then employed the assistance of three idolatrous women, but they proved ineffectual in getting her to change her mind. He then made a second attempt himself, in which he had the effrontery to try to assault her sexually. Almost immediately, Upian became blind and, indeed, he died a short time afterwards.

Florus, enraged at the death of Upian, caused Anastasia to be shut up in prison, with the intention of starving her to death, but the Lord miraculously preserved her life. Florus then transferred her to another prison, thinking the jailer had transgressed his orders to starve her, but she continued to live without food.

Florus then ordered her to be put on board a ship with 120 others whom he had chosen to sacrifice to the gods. The ship was bored with holes, and was supposed to sink. It soon filled with water but, instead of sinking, found its way ashore. This miracle worked the conversion of all on board, who afterwards suffered martyrdom for Christ. Anastasia and the others were then conducted to the island of Palmarola, where she finally was burnt to death.

A Christian lady obtained the remnants of her body, and gave it an honourable burial near Zara, in Dalmatia. About the year 460, under the Emperor Leo, her relics were transferred to Constantinople, and placed in the celebrated Church of the Resurrection, called The Anastasia. 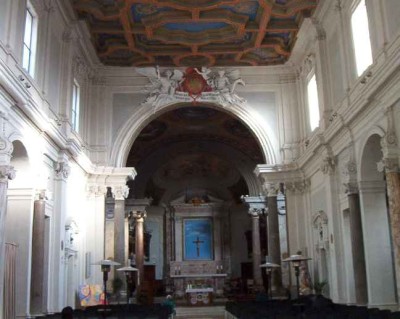 Station Churches of Rome The Church is built on the sight of Anastasia’s family mansion, and her relics are under the high altar.

Natasha
The word ‘Anastasia’ is derived from the Greek word ‘anastasis’, which means ‘resurrection’. This was the reason for burying her relics in the original church of that name. The Eastern European version of that same name is ‘Natasha’.

Sadly, this name has taken on an unsavoury flavour in recent years, as Europe emerges from the shadows of the Cold War. With the break-up of the old Soviet empire, there has been a great movement of population westwards. Ireland has seen the appearance of people from many of these former Soviet republics and satellite states. Many young girls and women have been lured to work in the West by false promises of jobs and security.

What many did not realize is that they were being lured into the sex industry. They were helped to obtain passports and visas, but their passport was into slavery, where pimps and predators tricked these unsuspecting women into a sordid life of sexual bondage. Recently, the Canadian journalist, Victor Malarek, has written a book on the international sex trade called The Natashas, in which he highlights the plight of these women.

Sadly, the enormous demand for commercial sex is the core of the problem. Here, every country has to examine its conscience in regard to the creation of this ugly industry.

When we think of St. Anastasia, we think of a woman who loved her Lord and Saviour despite the cruelty of her husband, and who resisted the sexual demands of a depraved pagan priest. We could do worse than invoke her intercession for help in bringing to an end this cruel and exploitative trade in human misery. May her name be fulfilled for the many thousands who wish to rise from slavery and experience new life.

This article first appeared in The Messenger (April 2006), a publication of the Irish Jesuits.