Summary: Dedication of the basilicas of Saint Peter in Rome, built in the 16th and 17th centuries, and Saint Paul’s Basilica, built in the 19th century, both replaced older buildings erected by Constantine in the 4th century over the tombs of the apostles Peter and Paul. The dedications of these churches have been commemorated together on this day since the 12th century.

Each of the four major basilicas in Rome has a feast of their dedication in the Liturgical Calendar, highlighting the link between Rome and the universal Church.
St Mary Major’s (5th August) and
St John Lateran’s (9th November.) The other two,
St Peter’s Basilica  and
St Paul’s-outside-the-Walls, celebrated today, (18th November)  Patrick Duffy gives some facts about the two basilicas. 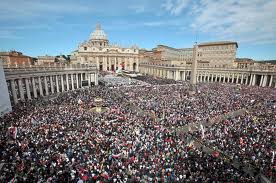 Basilica of St Peter
St Peter’s is built on the Vatican Hill, where Peter is thought to have been buried. The original building was built during the reign of Constantine. The popes only began to live there after the return of the papacy from Avignon to Rome.The present building of St Peter’s was begun by Pope Julius II in 1506 and for 120 years underwent many alterations under a succession of architects (Bramante, Raphael, Peuzzi and Sangallo). Its final form derives from Michelangelo who died (1564) before the erection of its great dome. The Basilica was finally consecrated by Pope Urban VIII on November 18, 1626. Excavations begun in 1942 discovered that the basilica was built over a large Roman cemetery: Peter’s tomb is thought to be located at 100 metres under the main altar. 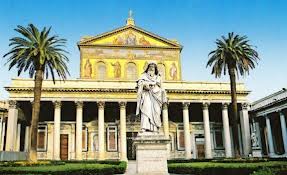 St Paul’s Outside the Walls

Basilica of St Paul’s-outside-the-Walls
St Paul’s-outside-the-Walls (image above) is located about seven miles from Rome near Tre Fontane on the Ostian Way, where Paul was said to have been martyred and the emperor Constantine began a basilica. This basilica was enlarged under Theodosius I and Pope St Leo the Great. It was burned to the ground in 1823. During reconstruction a fourth-century tomb was found, with the inscription PAULO APOST MART: “To Paul, apostle and martyr”. A new basilica, on the lines of the old one, was consecrated by Pope Blessed Pius IX on December 10, 1854. In the year of the Apostle Paul 2008-9 (the 2,000th anniversary of the apostle’s birth) it hosted the opening Mass for the Synod of Bishops on the Word of God. 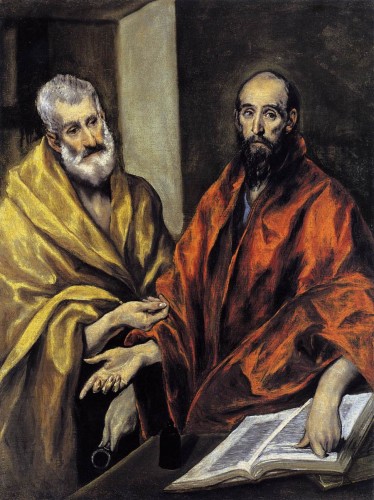