Home > Saints of the Day > Dec 28 -The Holy Innocents, martyrs

Summary :The Holy Innocents. When Herod realized that he had been deceived by the magi, he became furious and ordered the massacre of all the boys, two years old and under in Bethlehem and its vicinity, , in accordance with the time he had ascertained from the magi. Then was fulfilled what had been said through Jeremiah the prophet,’A voice was heard in Ramah, sobbing and loud lamentation.’ 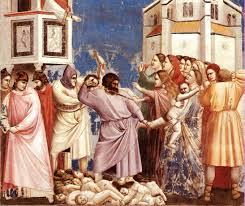 The Feast of the Holy Innocents, is sometimes referred to as Childermas, or Massacre of the Innocents’ Day. It is celebrated in the Christian churches in the West on Dec. 28th and in the Eastern churches on Dec. 29th. It commemorates the massacre of young male children by King Herod, the Roman-appointed King of the Jews. It happened after he had been told the prophesy by the Magi of the birth of a newborn king of the Jews. 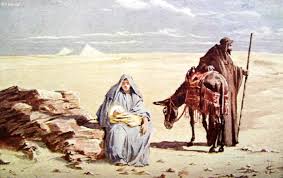 St Matthew in his gospel (2:16–18) wrote “When [the Magi] had gone, an angel of the Lord appeared to Joseph in a dream. Get up, he said, take the child and his mother and escape to Egypt. Stay there until I tell you, for Herod is going to search for the child to kill him. So he got up, took the child and his mother during the night, and left for Egypt, where he stayed until the death of Herod. And so was fulfilled what the Lord had said through the prophet(Jeremiah 31:15): “Out of Egypt I called my son.”

Herod resummoned the Magi and asked them the exact time of the star’s appearance. He then sent them off to Bethlehem with the instructions:
“Find out all you can about the child. When you have found him, let me know so that I, too, can go and pay him homage.”
Herod had a very different plan in mind.

The story is that he realised that he had been outwitted by the Magi astrologers and he was furious. He  called together the chief priests and scribes, experts in Jewish law, and asked where the Messiah was to be born. They said it would be in Bethlehem of Judaea, a small town not far from Jerusalem. They based their answer on a combination of texts taken from the prophet Micah (5:1) and the Second Book of Samuel (5:2) which read:
“You, Bethlehem, land of Judah, are by no means least among the princes of Judah, since from you shall come a ruler who is to shepherd my people Israel.”

Herod issued orders to kill all the young male children who were two years old or under in Bethlehem and its vicinity , in accordance with the time he had learned from the Magi. Herod did this to avoid the loss of his throne to this so called newborn King of the Jews. We don’t know how many innocent children were killed. The irony is that although all the children who were so savagely slaughtered were Jewish, they have been claimed as martyrs by Christianity. They died in Jesus name – Jesus himself being  a jew.

The children were regarded by the early church as the first martyrs, but it is uncertain when the day was first kept as a saint’s day. The children themselves were not believers in Jesus Christ but were killed for the sake of Christ. At first it may have been celebrated with Epiphany, but by the 5th century it was kept as a separate festival –  In Rome it was a day of fasting and mourning.

It is observed as a feast day and, in Roman Catholic countries, as a day of merrymaking for children. In some convents and monasteries the youngest nun and monk is jocosely allowed to act as abbess and abbot for the day – within limits of course!)

Sacred Space.i e for today says: “In honouring the Innocents, the Church honours all who die in a state of innocence, especially very young children and babies, and consoles parents of dead children with the conviction that these also will share the glory of the infant companions of the Infant Jesus.

We need to pray that wherever public opinion may hold and whatever laws are passed, we as Christians can remain firmly on the side of life, at every stage of it’s existence.

P.S (Nowadays we have added another category to the Holy Innocents : those millions of unborn fetuses or embyros of preborn children who are sadly killed through abortion before they even see the light of  day.)