Summay: the feast of Our Lady of Loreto. Pope Francis by his own authority has approved that the optional memorial of the Blessed Virgin Mary of Loreto should be inscribed in the Roman Calendar for 10 Dec., the day on which her feast falls in Loreto, and celebrated every year for the celebration of the Mass and the Liturgy of the Hours. 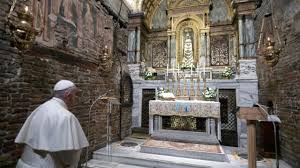 The Tradition
According to tradition, the Holy House of Loreto was carried by angels from Nazareth to the Italian hillside town of Loreto the night of Dec. 9-10 in 1294 after making a three-year stop in Croatia. Tradition holds that the small house, made of three stone walls, is the place where Mary was born, where she was visited by an angel and conceived Jesus through the Holy Spirit, and where the Holy Family later lived.

The decree said the shrine in Loreto “recalls the mystery of the Incarnation” and helps visitors “meditate both on the words of the angel announcing the Good News and on the words of the Virgin in response to the divine call.” And it has been able to “illustrate powerfully the evangelical virtues of the Holy Family,” it added. Millions of pilgrims flock to Loreto each year to venerate the tiny cottage. It is Italy’s most important and popular Marian shrine. It was one of the shrines St. John Paul II visited the most. 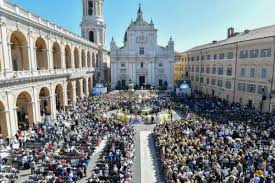 The Basilica della Santa Casa in Loreto is a Marian shrine which enshrines the little house in which the Blessed Virgin Mary is believed to have lived. Over the past several centuries, people from all parts of the world have traveled to this shrine to pray and seek Our Lady’s help. Thousands of miracles attributed to Our Lady have been recorded at Loreto. Many persons who have been canonized, beatified or made venerable by the Church including many popes have visited the Holy House. St. Therese of Lisieux made a momentous pilgrimage before entering the Carmelites, to which she alludes at length in her autobiography. St. Alphonsus Liguori, St. Frances Cabrini, Cardinal Newman, St. John Neumann, and St. Francis de Sales, to name but a few, have visited the Holy House.

When St. Francis of Assisi visited the Holy Land (1219-1220) he prayed at the Holy House. Over and over again the Holy House escaped destruction. In 1291 the crusaders were completely driven out of the Holy Land and it was at this point in history that the Holy House disappeared from Palestine and made its appearance in what is now known as present day Croatia, where a most important shrine was erected, Our Lady of Trsat (Tersatto in Italian pronunciation).

Custodians of the shrine have said the stones of the house were removed from the Holy Land and carried by ship by a member of the Angeli family. The family name is also the Italian word for “angels,” thus being the probable reason for the more popular notion of winged angels flying the house to Italy. Despite the possibility that the house came by way of ship, Our Lady of Loreto is still the patron saint of aviation and air travel.