Margaret Ball and Francis Taylor, were among a group of seventeen Irish martyrs beatified by Pope John Paul II in 1992.

Summary of Margaret Ball and Francis Taylor, a lay woman and a lay man respectively, were among a representative group of seventeen Irish martyrs of the 16th and 17th centuries beatified by Pope John Paul II on 22nd September 1992.

Patrick Duffy gives a brief resumé of their lives. 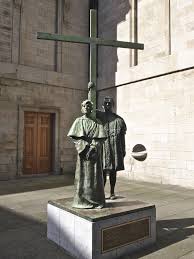 Born Margaret Bermingham about 1515 in Skreen, Co Meath, she married Bartholomew Ball, a prosperous Dublin merchant, where she came to live. Her eldest son, Walter, yielding to the pressure of the times, became a Protestant and an opponent of the Catholic faith. Margaret continued to provide ‘safe houses’ for bishops and priests passing through Dublin and would invite Walter to dine with them, hoping for his reconversion to Catholicism.

But Walter was not for turning. When he was elected Mayor of Dublin, he had his own mother arrested and drawn through the streets, on a wooden hurdle, as she could no longer walk, to Dublin Castle. Here she remained imprisoned for the rest of her life. If she had renounced her faith she could have returned home, but she refused and died in prison aged 70 in 1584. The chapel-of-ease, called Blessed Margaret Ball Church, built in the 1980s on the Coolock Road at Santry in Larkhill parish, Dublin, was named in her honour. 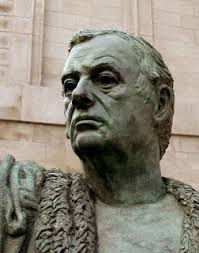 Francis Taylor was born into a wealthy Catholic family in Swords about 1550. In 1595 he was elected Lord Mayor of Dublin. A convinced Catholic, he refused to accept the Acts of Supremacy (Monarch is the head of the Church) and Uniformity (The Book of Common Prayer is the only legal form of worship and all citizens must attend Church services according to that form). Francis was put in prison in 1614 during the reign of King James I and remained there until he died seven years later. He is said to have been buried in the family grave in St Audeon’s Church.

A bronze sculpture of him along with Margaret Ball stands to the left of the main entrance to the Pro-Cathedral of St Mary’s (The Immaculate Conception) in Marlborough St, Dublin 1