Summary:  Mother Teresa during her lifetime was widely held to be a living saint as she ministered to the sick and  dying in some of the poorest neighborhoods in the world. Although some people criticized her for not also challenging the wider causes of injustices that kept so many people so poor and abandoned, her simple service touched the hearts of millions of people of all faiths. 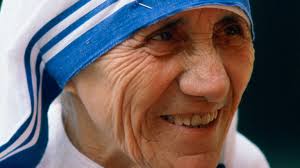 Contrary to the regulation that no person should be beatified until five years after death, Pope St John Paul II beatified Mother Teresa of Calcutta in 1999, just two years after her death allowing the opening of the process to declare her sainthood.

Early life
Mother Teresa was born of an ethnic Albanian family, and named Agnes Gonxha Bojaxhiu in Skopje, capital of the present Republic of Macedonia, in 1910. Her father, who was an Orthodox Christian, died when she was eight and she grew up in the care of her Catholic Albanian mother. She was fascinated from her childhood with missionaries and by the time she was twelve she wanted to enter religious life. In 1928, when she was eighteen, she left home to join the Sisters of Loreto in Ireland where she took the name Mary Teresa. Sent as a missionary to Calcutta, she enjoyed her work as a teacher and school principal, but was disturbed by the poverty surrounding her in Calcutta.

Her call: To be poor with the poor
One day while travelling on a train to Darjeeling, she experienced an overwhelming sense of divine call “to be poor with the poor”. She waited for two years for approval of the new order she founded, the Missionaries of Charity, before going into the slums of Calcutta. Here she washed children’s sores, cared for an old man lying on the road and for an old woman dying of tuberculosis and starvation. 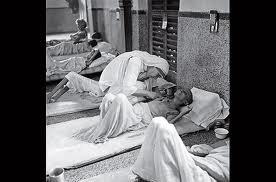 Criticisms
There were many criticisms of her, especially for her strong views on contraception and abortion. In addition, there were allegations of misuse of donations. In particular, Christopher Hitchens in his book, The Missionary Position (1995), said she was a political opportunist who adopted the guise of a saint in order to spread an extreme and aggressive version of Catholicism.

‘The damned of hell suffer eternal punishment because they experience the loss of God. In my own soul, I feel the terrible pain of this loss. I feel that God does not want me, that God is not God, and that he does not really exist.’

However she continued to trust that the God she had never seen was to be found in the poor for whom she worked.

Death and influence
When she died at the age of eighty-seven on 5th September 1997, the Government of India gave her a state funeral in gratitude to her services to the poor of all religions in India. At the time of her death the 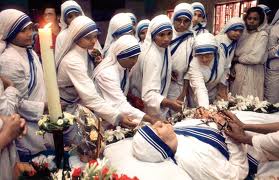 Missionaries of Charity numbered 4,500 and had 517 missions in over a hundred countries.

Pope Francis,  On December 17, 2015 Pope Francis announced a second miracle had been attributed to the intercession of Mother Teresa. The miracle involved a Brazilian man who was afflicted with tumors who was miraculously cured. This cleared the way for Mother Teresa’s canonization. Mother Teresa was canonized on September 4, 2016 by Pope Francis. The date chosen for her canonization is the eve of the 19th anniversary of her death and the date previously established at the Vatican for the conclusion of the Year of Mercy pilgrimage of people like her who are engaged in works of mercy.