Summary: Blessed Edmund Rice, religious (1762-1844) came from Callan, County Kilkenny. After his young wife’s early death, he sold his possessions and dedicated his life to the education of the poor. To advance the work he gathered other like-minded men who took religious vows together to work for the Catholic education of boys. He is a model of patient and cheerful acceptance of the sufferings God sends, a true lay apostle and a deeply committed religious. 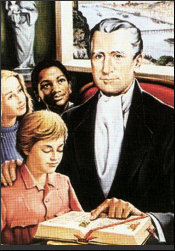 Bl. Edmund Rice from Callan, Co Kilkenny was a businessman, husband, widower, father of a handicapped child, advocate of the poor and the founder of two religious congregations devoted to education the Christian Brothers and the Presentation Brothers. He was beatified in 1996.

Donal Blake, the author of this article, is the postulator of his cause for canonisation.

Home in Callan, Co Kilkenny
Edmund Rice, founder of the Christian Brothers and Presentation Brothers, was born to Robert and Margaret Rice, prosperous Catholic tenant farmers, at Westcourt, Callan, Co. Kilkenny, on 1st June 1762. He was the fourth of seven brothers, and had two stepsisters, Joan and Jane Murphy, from his mother’s first marriage. The Penal Laws against Catholics were still in force in Ireland.  Co. Kilkenny fared better than many places because of the tolerance of John Butler, the Protestant Duke of Ormonde who resided in Kilkenny Castle. As a result, enterprising Catholics, such as Robert Rice, were enabled to rent farmland from tolerant Protestant landlords at reasonable rates. So Edmund was fortunate in a land where and at a time when the majority of Catholics were “hewers of wood and drawers of water”.

Apprentice businessman, married and widowed
After education at a “hedge school” in Callan and a commercial academy in Kilkenny, Edmund was apprenticed at the age of seventeen to his uncle, Michael, who was involved in the provisioning and ship’s chandling business in Waterford. A born entrepreneur, Edmund quickly mastered the importing and exporting trade and expanded his uncle’s business. He signed a lucrative contract to supply meat to the British Army and explored trading connections 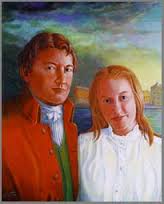 with Bristol, Newfoundland, and Boulogne-sur-Mer in France. He married at the age of twenty-three, and the future looked rosey. Then, in 1789, his pregnant wife died tragically leaving him with a handicapped baby daughter Mary. Edmund’s world was turned upside down. So was the political world in that same year, by the egalitarian ambitions of the French Revolution.

Search for a deeper meaning
His uncle appointed him his heir, but his recent tragedy caused Edmund to look for a deeper meaning in his life. He looked to God for guidance and, unusual for a lay Catholic at the time, he turned to the Scriptures for inspiration. He became a daily Mass-goer and a reader of the mystic, St Teresa of Avila. His commercial career still prospered. The forward-looking principles of the French Revolution, if not its crude methods, appealed to his generous heart. ‘Liberty, fraternity, equality’, but with a more Christian overlay, were ideals that Edmund dearly wished for his benighted fellow-Catholics in Ireland. 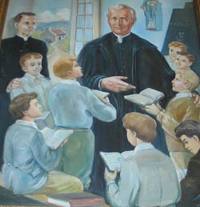 Education for poor boys
He became a frequent visitor to the other Waterford which existed behind the facade of commercial prosperity and merry social life – the Waterford of narrow streets and dark alleyways where the miserable hovels of the poor were crowded together. He was encouraged by a woman friend to turn his attention to the plight of poor destitute boys. He looked around for a template for the way forward. Inspired by what Nano Nagle had achieved by her Presentation convents for the plight of poor girls, Edmund at the age of 40, turned his back on his business career in 1802 and opened a temporary school for poor boys in New Street. Having made provision with his relatives for his daughter’s special needs, he deployed all his energies and wealth in the new undertaking.  He sank most of his assets into the building of a permanent school and residence at Mount Sion.  There was to be no turning back. 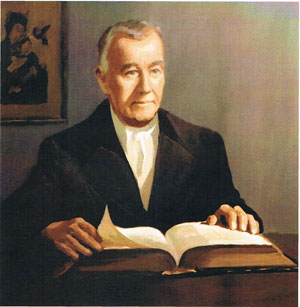 “The Founder of the Christian Brothers was a man of broad vision with an enlightened compassion to serve, a compassion intensified by a remarkable perception of the social conditions of his time”.

Two paid assistants left him. He quickly realised that temporary commitment to a full-time problem was no solution, and so he invited young men to join him permanently in his work and prayer. In 1808, Edmund and his early companions gave total commitment to their new way of life by the taking of vows in the presence of the local bishop, and thus forming the Society of the Presentation. Edmund became “Brother Ignatius”, named after the founder of the Jesuits. The work soon spread to other towns, in the diocese of Waterford first, and then to other parts of the country where the local bishops, impressed at what they saw in Waterford, hoped to spread the benefits of Catholic education in their own dioceses. In 1820, with the blessing of Pope Pius VII (Luigi Chiaramonti 1800-23), the majority of the brothers under Edmund as Superior General were organised into a pontifical congregation – the Congregation of Christian Brothers [CFC], to make it more mobile not only in Ireland but wherever the need for education was greatest. A minority retained the Presentation name as a diocesan group subject to the Bishop of Cork and evolved into today’s Presentation Brothers [FPM].

Spread through Ireland and abroad
During Edmund’s lifetime, day and evening schools to meet the educational needs of the poor were opened by his followers in Ireland and England and a beginning was made in overseas missions that were to blossom after his death, in Gibraltar, India, America and Australia. Not only did Edmund and his followers work in the classroom but they were to be found visiting the hospital wards, the debtors’ prisons and even accompanying poor wretches to the gallows. Fighting for the legal rights of widows and orphans occupied much of Edmund’s time, where he brought his knowledge of the law learned during his business career to the defence of those in danger of being deprived of their rights. Edmund endured much hardship, misunderstanding and opposition, even from some bishops and, more hurtful, from some of his own confrères, but, nurturing his vision through prayer and a wonderful trust in Divine Providence, he persevered with his extraordinary mission until his death on 29th August 1844.

A reputation for holiness and care for the poor
After initial neglect due to the Great Famine and to divisions among his followers, Edmund’s reputation for holiness and care for the poor and ignorant grew over the years. Prayer and apostolic groups – the Edmund Rice Network – sprang up wherever there was a Christian Brother or Presentation Brother presence. There were repeated requests to Rome for Edmund’s canonisation. In more recent years Edmund’s Brothers, despite being fewer in numbers, have concentrated on the Third World countries of Africa, South America, India and the West Indies, and on the inner cities of the First World. Their lay collaborators staff hundreds of schools imbued by the spirit of Edmund on all five continents.

On 6th October 1996, at the end of a long process and after the acceptance of a miracle worked through his intercession, Edmund was declared ‘Blessed’ by Pope John Paul II at a memorable ceremony in Rome. His feast-day is celebrated on 5th May each year.  In 2003, Br Donal Blake, was appointed Postulator to lead the process from beatification to canonisation and, if the Lord ordain it so, it should not be too long before Edmund is declared ‘Saint Edmund’. One further miracle is required.

League of Prayer’
Branches of a ‘League of Prayer’ are organised in many parts of the world and monthly bulletins record both requests for and answers to prayers for many intentions. Edmund’s birthplace at Westcourt, Callan, the O’Connell School, North Richmond Street, where he lived when in Dublin, Mardyke House in Cork, where the founding Presentation name lives on, and Mount Sion, Waterford, where he began his religious and educational undertaking and where he died, are now centres of prayer for his thousands of devotees. The appeal of Edmund is wider than the members of his two religious congregations – the Christian Brothers and Presentation Brothers. He is now invoked as: Edmund the family man, Edmund the widower, Edmund father of a handicapped child, Edmund businessman of integrity, Edmund the humane teacher, Edmund the lay Catholic activist, Edmund the lay religious, Edmund advocate for the deprived, Edmund patron of the ordinary in daily life…

The direction of his long life is best summed up in an extract from one of his letters, written in 1810 to a friend of his, the architect Bryan Bolger:

“Let us do ever so little for God, we will be sure He will never forget it, nor let it pass unrewarded.  How many of our actions are lost for want of applying them to this end.  Were we to know the merit of only going from one street to another to serve a neighbour for the love of God, we should prize it more than gold or silver…. One thing you may be sure of, that whilst you work for God, whether you succeed or not, He will amply reward you.”

Prayer for the Canonisation of Blessed Edmund Rice

O God, we thank you for the life of Blessed Edmund Rice.  He opened his heart to Christ present in those oppressed by poverty and injustice.  May we follow his example of faith and generosity.  Grant us the courage and compassion of Blessed Edmund as we seek to live lives of love and service.  Grant that soon, if it be your will and for the good of souls, he will be declared a saint of your Church.  Amen.

Prayer for a Favour

O God, you inspired Blessed Edmund Rice to follow your Son in a life of consecrated service of the poor and of all in need of a truly Christian education.  Grant through his intercession the petition I now make … … … and so hasten the day when he will be declared a saint of your Church.  Amen.