Summary of St Justin, Martyr. born about 100 at Nablus (Palestine); died about 165 in Rome. After lengthy study of Greek philosophies, he acknowledged Christ as the source of all truth. A lay intellectual, Christian philosopher, and apologist. He was noted for his reasoned defence of Christian belief and practice and for the ultimate witness given by his martyrdom.

This image shows Justin trying to explain Christianity to the Roman world. It was in this context that he met his fate as a martyr.

Justin has also left us in his writings a very beautiful description of the Mass as it was celebrated in his time. He sought to explain the beauty of the Christian faith and so is called an apologist – one who gives the reason (Gk apologia) for his faith. Fr John Murray PP tells his story.

The Church calls him patron of philosophers and indeed he is a worthy model for all who seek the truth amid the myriad ideas which surround us today. Justin, who was born about the year 100 A.D., belonged to a group of early disciples who endeavoured to explain the Christian faith to a hostile world.

Liberal education
His story begins in Nablus, in Samaria, near the ancient town of Sichem, mentioned in John 3. His parents, probably of Greek origin, were able to give him a liberal education. The young Justin enjoyed reading poetry and history. His thirst for knowledge had been awakened, and soon his attention turned to philosophy. Just as today, there were plenty of philosophies around and Justin tried each in turn. He looked at the popular philosophy of Stoicism but abandoned it when he found it taught him nothing about God. Another teacher disgusted Justin when he demanded a fee before he had even tried to teach. The school of Pythagoras required a good knowledge of geometry and astronomy before he could proceed further. Justin seemed satisfied when he entered into the study of Platonism, which at least was interested in spiritual realities.

Alternative philosophy
However one day when he was walking along the beach thinking about one of Plato’s sayings, he turned round and saw he was being followed by an old man. The stranger aroused Justin’s interest by telling him there was a philosophy nobler and more satisfying than the one he had been pursuing. The old man went on to tell him that God had revealed himself to the Hebrew prophets of old and that this revelation had reached its fulfilment in a man called Jesus Christ. He encouraged Justin to pray fervently so that the doors of light might be opened to allow him to obtain the knowledge which God alone could give. The old man’s words inspired Justin to do this and about the age of thirty, he embraced the Christian faith.

Climate of fear
The situation for the Church at this time in the second century was that many Christians who were uneducated did not want to reveal anything about the Christian mysteries in order to protect themselves from the general populace and from profanation. At this time, some of the Christian mysteries were mocked, even in the theatre. Justin, on the other hand, was convinced from his own experience that there were many who would gladly accept Christianity if it were properly explained to them. It is a situation which is not unlike today when many who seek God are not fully aware of the beauty of the Catholic faith and Catholics either lack the confidence or the enthusiasm to expound it.

Consequently in his oral teaching he set up a catechetical school and in his writings, Justin set forth the faith of the Christians and described what happened at their meetings. Apart from his philosophical writings and his exposition of the role of the Logos (the second person of the Trinity), Justin also explained the early Christian liturgy to the pagans and he left us some of the most beautiful descriptions of the early Mass.

As we read these ancient texts, even in their rudimentary form, we can recognize the various parts of our present day Eucharist: ‘Having ended the prayers, we salute one another with a kiss. There is then brought to the president of the brethren, bread and a cup of wine mixed with water; and he, taking them, gives praise and glory to the Father of the universe, through the name of the Son and of the Holy Spirit, and offers thanks at considerable length… and when he has concluded the prayers… all the people present express their assent by saying “amen”.’

Eventually it was to Rome that Justin also travelled and it was here that he encountered a teacher called Crescens whom he accused of ignorance and misrepresentation of the faith. This encounter did not endear him to the latter and apparently on a second visit to the imperial capital he was denounced by Crescens and was condemned to death by beheading. Here Justin entered into his most glorious hour as he shared for one last time the beauty of the faith which had captured his heart and mind all those years before.

Interrogation and execution
The prefect of Rome in the year 165 AD was Rusticus and it was he who interrogated Justin, ‘What doctrine do you hold?’ ‘I have tried to become acquainted with all doctrines, but I have adopted the true doctrines, those of the Christians, even if they are not acceptable to those who hold false beliefs.’ 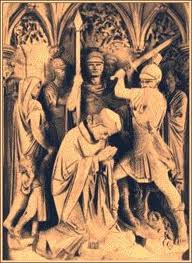 The scaffold had become his platform as Justin saw this moment as one last opportunity to be an apologist for the faith. In exasperation Rusticus tried another tack: ‘You are said to be a man of learning. If you are flogged and executed, do you believe you will go to heaven?

Justin replied, ‘I know that all who lived good lives can look for the divine grace that is stored up for them until the end of the world. No one in their right mind is going to turn away from the worship of the true God to worship false gods.’

His companions said likewise, ‘Do what you like to us. We are Christians and we do not sacrifice to idols.’ The prefect gave the order and so Justin and his friends were beheaded. His feast is on 1 June.

This article first appeared in The Messenger (June 2007), a publication of the Irish Jesuits.