Ninian  was a Christian saint first mentioned in the 8th century as being an early missionary among the Pictish peoples.  His ministry centered around Whithorn and Galloway ion Scotland. The monastery in Whithorn was later referred to by Bede as ‘ad candidam casam’.  There are many churches dedicated to him. He was buried at Whithhorn where his shrine became a place of pilgrimage until the sisteenth Century. He was also revered in Kent and Denmark.  Ninian was also called Nynia, Ninias, Rigna, Trignan, Ninnidh, Ringan, Ninus, and Dinan.

The two primary historical sources about Ninian’s life and work are of dubious reliability. According to one, a 12th-century life by St. Aelred of Rievaulx, Ninian was the son of a Christian Briton chieftain. He made a pilgrimage to Rome, where he was consecrated as a bishop, and, in Aelred’s narrative, traveled through Gaul on his return journey, along the way befriending St. Martin of Tours. An earlier source, St. Bede the Venerable’s 8th-century Ecclesiastical History of the English People, implies that Ninian began the conversion of the Picts, a notion based on even earlier—and not entirely trustworthy—accounts of the period.

More certainly, Ninian was the first bishop of Galloway. 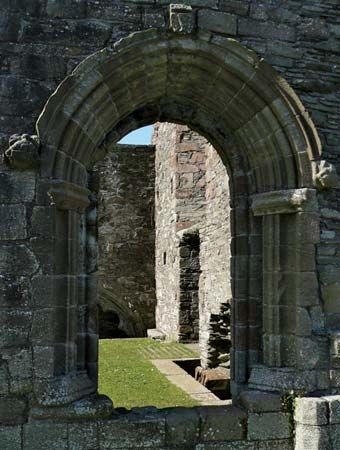 That he established his see at Whithorn, Caledonia, is a supposition borne out by modern anthropology. There, about 397, he built a whitewashed stone church (hence Whithorn, or White House, from the Anglo-Saxon Huitaern; Latin Candida Casa)—a notable departure from the customary wooden churches of the Britons.

The monastery (image right) that he established at Whithorn was, by the 6th century, a leading Anglo-Saxon monastic centre.