Home > Featured > Safety the key as over 20,000 people to make Reek Sunday climb

Safety the key as over 20,000 people to make Reek Sunday climb 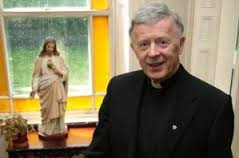 This pilgrimage has been carried out uninterrupted for over 1,500 years. Croagh Patrick has over 100,000 visitors annually, with up to 20,000 making the pilgrimage on Reek Sunday weekend each year.

Pilgrims intending to make the annual Croagh Patrick pilgrimage this Sunday are advised to have appropriate footwear and clothing, to bring a stick, carry a charged mobile phone and ensure they have adequate food and water.

That is according to the Administrator of Westport parish, Fr Charlie McDonnell. Speaking to local radio, he stressed safety as thousands are expected to climb the holy mountain on Reek Sunday.

Masses will be celebrated on the summit on Sunday on the hour between 8am and 2pm. Fr McDonnell said that “it is important to realise that if you are not feeling well, you should not attempt the formidable climb.”

Meanwhile, Mayo Mountain Rescue (MMR) will coordinate the country’s biggest mountain rescue plan this weekend, which involves 120 personnel – from all of Mountain Rescue Ireland’s teams as well as rescue teams from the UK.

The rescue team will co-ordinate the rescue and emergency care services for some 25,000 pilgrims who will climb Croagh Patrick over the coming weekend. In the past there has been an average of 20 casualties over the 24-hour period on the Sunday.

They will be supported by all the local divisions of the Order of Malta, Mayo County Council personnel, the Irish Air Corps, An Garda Síochána, the Coast Guard, Civil Defence groups, Westport parish, Murrisk Development Association and local landowners.

The Croagh Patrick pilgrimage is associated with St Patrick who, in 441, spent 40 days and nights fasting on the summit, following the example of Christ and Moses. The name ‘Reek Sunday’ comes from Patrick’s ability to Christianise many pagan customs, including the festival of Lughnasa, which previously had heralded the start of the harvest festival honouring the ancient pagan god Lugh, whose name is encompassed in the Irish word for August: Lughnasa/Lúnasa. This festival’s tradition became absorbed into the new Christian beliefs and locally become known as Domhnach na Cruaiche (Reek Sunday). 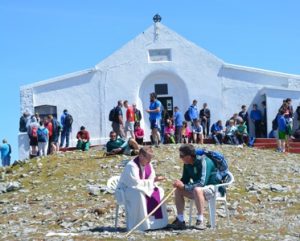 The pilgrimage will be led by the Archbishop of Tuam Dr Michael Neary. This year’s climb will have a special focus on the family as preparations begin for the World Meeting of Families 2018 (WMOF2018).

WMOF2018 is inviting Reek Sunday pilgrims to pray for families and wear a special sticker as a symbol of bringing families with them in prayer as they make their ascent to the summit.

The Sacrament of Reconciliation will be available on the mountain from 7.30am and will conclude at 2.00pm. The first Mass on the summit will be celebrated at 8.00am and every hour after that until the final Mass of the day at 2.00pm. A special Mass will also be celebrated in Saint Mary’s Church in Westport on the Eve of the Climb at 6.30pm, and this Mass will be celebrated by Archbishop Michael Neary.