Creative brain losing out to demands of digital media 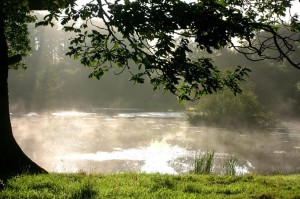 Certain solutions to problems are more likely to come about when your mind is wandering, according to a Trinity College professor.

In his blog, Prof Ian Robertson, who holds the Chair in Psychology, says that constant use of technology, such as iphones, is “neurally all consuming”.

He warns that filling every waking minute of a day by checking emails, texts and Facebook, deprives the brain of “an entire class of experiences which go under the names of mind-wandering, daydreaming or just plain sitting”.

“Creative solutions to problems are more likely to come when your mind is wandering than when it is focused on a task like thumbing through a thousand tweets” he writes.

Commenting on his observations, the Abbot of Glenstal, Dom Mark Hederman, said he always associates the Holy Spirit with “creative solutions” but other people do not.

“They have their own names for what happened to them out of the blue, a whole alphabet, rather than ideas of the Holy Spirit.”

The abbot of the famous Benedictine Abbey, which lies on 300 acres, and which some find “ominously silent” told CatholicIreland.net that he does not have a mobile phone himself.

“It is not for any form of asceticism. I have an allergy to the idea that someone in my pocket can be calling me.”

But he does not see technology as an evil. “It is neutral. It can be used by the Holy Spirit very effectively.”

However, like the Professor of Psychology at TCD, he believes that there have to be moments “where we’re not endlessly bombarded with these things.”

In Glenstal, the monks have put in two ‘God Pods’ – places without Wifi. “You can go there and clear a space for yourself,”said Dom Hederman.

Prof Ian Robertson also commented in his blog on Facebook use. “Young adult Facebook users were texted five times per day for two weeks to ask about their mood and Facebook usage.

“The more people used Facebook at one time point, the more their life satisfaction declined over time,” he writes.

Dom Hederman sees a need for people to learn ‘mindfulness’.

“In Buddhism, they teach people as a matter of personal hygiene to be mindful. They all learn that.”

“We imagine you can do it without any help or technique, but it is important to safeguard privacy and an inner garden or space where we are able to assess things and work out for ourselves what we think.”

Abbot Mark Hederman lives at Glenstal Abbey, which is home to around 40 Benedictine monks.

Its community life of prayer is combined with running a boarding school for boys, a farm, a guesthouse and other projects. The Abbey is also a well known venue for courses on, for example, chant and ecology.