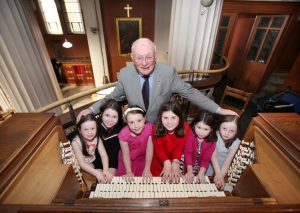 One of the country’s foremost musicians was honoured on Sunday by President Michael D. Higgins and Archbishop Diarmuid Martin as he retired from his role as organist of St Mary’s Pro Cathedral in Dublin after 42 years.

Describing Professor Gerard Gillen as a “maestro”, Archbishop Diarmuid Martin told the congregation that the 76-year-old former Maynooth professor had given “a life’s dedication of service to the Church and to the beauty and dignity of music in the liturgy”.

Despite his “truly outstanding contribution” and brace of prestigious international prizes and honours, the grandfather of eight, who was educated at UCD and Oxford, was never a “prima donna”, Dr Martin said. He had “uplifted so many hearts” from the organ loft from where “he was very rarely seen” by the congregation.

He also noted that the Dubliner was not just a “talented musician but also a great teacher” and had over the years dedicated himself “to instilling in young people a passion for music and an awareness of the quality music brings to the liturgy and worshipping communities”.

The Archbishop’s comments were made in the presence of President Michael D. Higgins and his wife Sabina, who invited Professor Gillen to play the organ for their wedding in Haddington Road church in Dublin in 1974.

A reception was held after Mass at the Pro Cathedral’s rectory on Sunday and was attended by Professor Gillen’s wife of 47 years, Patricia, 2 of his 3 sons and 6 of his 8 grandchildren, as well as representatives from Maynooth University and other academic institutions and church musicians.

Archbishop Martin noted that Gerard Gillen’s work as an organist had been set in the framework of two papal visits. He played in the Phoenix Park in 1979 for Pope John Paul II and he played at the Pro Cathedral in Dublin four weeks ago when Pope Francis visited.

Administrator of the Pro Cathedral, Fr Kieran McDermott, told the country’s foremost organist, “You will be greatly missed.” 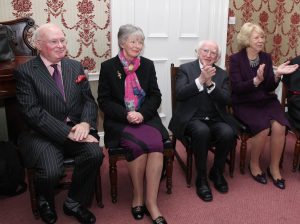 Professor Gerard Gillen and his wife Patricia being congratulated by President Michael D. Higgins and his wife Sabina at a presentation in the Pro Cathedral. Pic John Mc Elroy

In a message delivered on Sunday, Fr McDermott said that Gerard Gillen was known the world over for his remarkable musicality, technical superiority and academic excellence.

He highlighted how, over the years, Professor Gillen had frequently been in demand as a consultant on various organ-building and restoration projects throughout the country.

Professor Gillen told CatholicIreland.net that these included the new organ for St Mel’s Cathedral in Longford after the previous one was destroyed in the 2009 Christmas fire.

He will continue giving organ recitals and has engagements planned for next year at King’s College, Cambridge, Queen’s College, Oxford and Antwerp Cathedral in Belgium.

Speaking to CatholicIreland.net, Professor Gillen said he had chosen Dvořák’s Mass in D for Sunday’s Mass for its “very beautiful setting. I have played it several times over the years and it is one that I always come back to with great affection and great love.”

Asked how sacred music has sustained his faith, Professor Gillen said, “It has been very important and continues to be very important. Music can express things that words alone cannot express and we need this additional resource to try and express something of the nature of faith and belief. Music provides it to us in spades.”

He suggested that it was important for the Church to “preserve this continuity of music through the centuries” from Gregorian chant through Hildegard of Bingen to the Renaissance, Baroque, Classical period, Romantic period up to the contemporary period.

“It is very important that we use the full resource of all that in Christian worship – it is a sort of a hermeneutic of faith expression; it gives us a continuity with the Communion of Saints.” 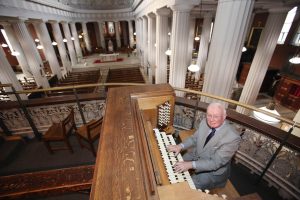 Of the debates around liturgy, he suggested that too many people had “become unduly obsessed with the minutiae of translations at the expense of seeing the greater picture.

“Music is caught up in this because music is composed with a certain text in mind or a certain translation and if that is changed, there is a danger that a great work of art is rejected because it doesn’t fit into the contemporary requirement – I think that can result in a terrible impoverishment. Music leads us to transcend the limitations of the word in a very spectacular way.

“The liturgy doesn’t absolutely require music and it is much better to have no music than bad music!”

As to the future, he said that apart from next year’s organ recitals he might do some composing and some writing.

“I might do a bit of writing about my personal life and music life over the years and say a few things about the Irish Church which I have been watching for 40 years. It is so sad to see the decline and at the same time you fully understand it. The Church is the author of its own misfortunes, as we all know. The price it has paid is a very heavy one.”