Home > News > Ireland a destintion for traffickers and pimps – Ruhama

Ireland a destintion for traffickers and pimps – Ruhama 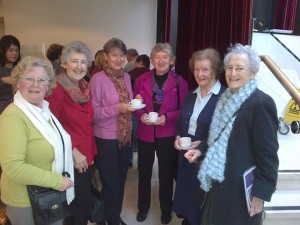 Members of APT – Act to Prevent Trafficking – at Ruhama’s ‘Pathways Through Prostitution’ seminar on Thursday.

Ireland is a destination for traffickers and pimps from all corners of the globe, the CEO of Ruhama has warned.

Launching the NGO’s 2012 annual report, Sarah Benson said the “bulk of prostitution in Ireland is connected with organised criminality.”

She highlighted that despite a decline in Ruhama’s statutory funding, they still provided services to a record number of women last year.

Between 800 and 1,000 women in Ireland are involved in prostitution. Ruhama provided services to 258 women from 32 nationalities which included 13,000 telephone calls and 908 face to face contacts with 170 women.

“Ruhama continues to work with significant numbers of Irish women but the majority of those in the indoor sex trade are migrant women and this is reflected in this report”, Sarah Benson said in Dublin on Thursday.

She underlined that it was beyond doubt that prostitution and trafficking for sexual exploitation are inextricably linked.

For 24 years, Ruhama, which was founded by the Good Shepherd Sisters and Our Lady of Charity Sisters, has offered a holistic service which responds to the needs of women trapped in prostitution.

It also helps them exit prostitution by providing practical educational advice as well as information on immigration, health, family, housing and legal issues.

Launching the report, Fine Gael TD for Laois-Offaly, Marcella Corcoran Kennedy, recalled being aware of on street prostitution when she moved to Dublin in the 1980s. She noted the increase in off street prostitution in Ireland and outlined the current situation in relation to proposed new legislation which will criminalise those who buy sex.

“I fully support Ruhama and the Turn Off the Red Light campaign”, Deputy Corcoran Kennedy said.

She warned that the Julia Roberts ‘Pretty Woman’ impression of prostitution was still pervasive and needed to be challenged.

She also suggested that there was no point in criminalising the purchaser of sex unless the proper supports were in place to help women to exit prostitution.

“The attempt by some to separate trafficking from prostitution is appalling and not acceptable in our country,” she said in her address at the Morrison Hotel in Dublin and added that it was “not acceptable” that migrant children were being brought into Ireland for prostitution.

A former prostitute who spent six years on the streets of Dublin warned that only legislation which criminalises the purchasers of sex will change the behaviour of pimps, traffickers and those who buy sex.

Mia De Faoite was speaking following her presentation in which she related some of her experiences as a street prostitute which began when she was thirty-three out of desperation to feed her addiction to heroin.

“You can educate all you like but the people who bought me won’t be changing without legislation,” Mia De Faoite told CatholicIreland.net

“It like the smoking ban. We all know smoking is bad for us but it was only when the law was introduced and enforced, that people’s habits started to change.”

Forty-three year old Mia De Faoite ‘walked off’ the Burlington Road on 10 October 2010 and left behind her life of prostitution and went into detox for her heroin addiction.

The mother of one and grandmother of two related some of her experiences in prostitution before she got help from Ruhama. She is now in her second year of university studying philosophy at NUI Maynooth.

According to Sarah Benson, CEO of Ruhama, the purchasers of sex tend to be Irish men, usually under 45 years, who fall into the middle income bracket and are married or in a committed relationship.

“I used to take notes of what profession they were in,” Mia De Faoite recalls. “I used to try and make sense of why they were buying sex. I always thought they were men who in some way felt inadequate or lacking in power in their own lives. Many would have been connected to quite successful women.”

Mia De Faoite’s tale is one of brutal gang rape and sexual assault. One of her most terrifying ordeals occurred when she revealed to a male purchaser that she was a lesbian. He then unleashed his rage. “Prostitution is about power, control and humiliation”, she explained.

Her tale echoes many of those of the women whom Ruhama has helped, who related stories about being raped, robbed and physically attacked. Overall, the health of women involved in prostitution is often very poor physically and mentally.

Ruhama’s CEO said it was critical for women to be able to access free and confidential health services as well as drugs detox programmes.

She said the voice of the survivors of prostitution is loud and growing louder and that as society becomes more informed about the issues, that sense of entitlement to purchase sex which many men feel they have will be increasingly challenged.

Mia De Faoite questioned whether some of those who have regaled tales of making mega bucks by choosing prostitution as a career are not in fact “pimp mascots”, women paid by the €250 million prostitution industry to promote an airbrushed account of the life.

According to Sarah Benson, Ruhama has “worked with thousands of women over the years, women who are still actively involved in prostitution and those at the point of exiting – they do not romanticise the experience. What you will almost invariably find is that behind their experience before they entered prostitution was something that put them in circumstances of constrained choices.”

“So while there may be a handful who say publicly that they are freely choosing prostitution, from our experience of working directly with women and also from international studies, the vast majority are coming from a place of constraint. When you are talking about legislating and creating policies you need to look at the majority and protecting their rights first,” she said.

Asked by CatholcIreland.net if there was any possibility of going back to prostitution, Mai De Faoite responded, “No, no, absolutely not. Life has completely turned around. I surrounded myself with people who were not concerned with the fact that I fell but only with the fact that I continued to rise. I have a small group of really healthy good friends. I have returned to pride and I can dance and laugh again.”

“I was terrified of being angry and remaining angry for the rest of my life but I found a channel and that was speaking out – and doing something constructive.”