Roy Keane says faith means a lot to him 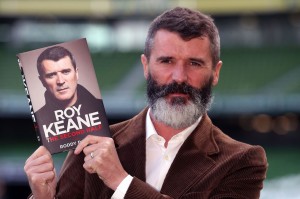 Irish footballing legend Roy Keane has made it clear that his faith means a lot to him and that he trusts in God to look after him.

In his recent autobiography, ‘The Second Half’ which he wrote with prize-winning novelist Roddy Doyle, the Cork-born legend says he likes an edge to his life.

He recognises that man of anger and controversy as he has been portrayed by some media is in stark contrast to the not so well known man of faith.

“Sometimes I don’t know what’s best for myself,” he explains, “and that’s why I’ve got great faith; the man upstairs looks after me. I just have to trust Him a bit more.”

In this part of his autobiography, Keane also reveals himself as a bit of a philosopher.

“I have great stability in my life,” he writes, “but then, that worries me. I like my home comforts, but then I want to be this hell-raiser – but I want my porridge in the morning. I want my wife and kids around me.”

Elsewhere, he admits, “I’ve dipped into the madness, and I don’t like it that much. I like walking my dogs in the morning. Maybe I’m like every man on the planet – I don’t know; I want a bit more than what’s on offer. My mid-life crisis has been going on for years.”

Keane reveals a touch of biblical wisdom when he talks about anger and rage.

“There’s a difference between anger and rage,” he explains. “With anger – when I’ve been angry – somebody with me, or even myself, can pull it back. But with rage, I’ve gone beyond all that; it’s beyond anger.”

But he says it is rare now for him to feel that rage.

“It’s rare – even more so, now that I’m not playing football. And I’m not sure that I ever felt pure rage on the football pitch. All the times I was sent off, it was frustration or a controlled anger.”

“There’s no control with rage. It’s not good – especially the aftermath. You’re coming down, and it’s a long way to go.”

“The come-down can be shocking in terms of feeling down, or embarrassed by my behaviour, even if I feel that I wasn’t in the wrong. I haven’t felt real rage in a long time, thank God.”