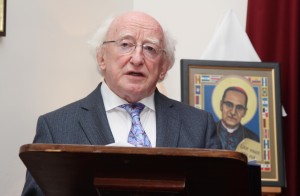 President Michael D. Higgins speaking about Archbishop Oscar Romero at a reception after the mass in the Pro-Cathedral Dublin this evening. Pic John Mc Elroy.

“Blessed Oscar Romero challenges us all to speak out on behalf of the poor and the vulnerable today,” Fr Richard Sheehy told Sunday’s Mass in Dublin marking the beatification of El Salvador’s martyred bishop.

In his homily, Fr Sheehy said the poor in Ireland were asylum seekers caught in the legal limbo of ‘direct provision’, refugees driven from their homelands by conflict, or Christian and other religious minorities experiencing persecution in the Middle East.

The Mass, which also celebrated the Festival of Peoples, was attended by President Michael D Higgins and his wife Mrs Sabina Higgins.

Fr Sheehy highlighted that the increasingly desperate attempts by thousands of refugees to cross the Mediterranean is a challenge to ‘Christian’ Europe, which demands a coordinated and compassionate response.

“The commitment by the Government that Ireland will accept 300 refugees marks, I hope, just the beginning of our response,” he stated.

He said that much as Irish emigrants in the past contributed greatly to building up of Catholic communities in Liverpool and London, Boston and Butte, so today immigrants from many parts of the world are renewing the faith life of the Irish Church.

“They are also helping to create a new and culturally diverse Ireland, expanding our understanding of what it means to be Irish.” 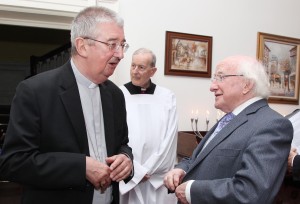 Referring to the beatification in El Salvador of Archbishop Romero, who was assassinated while celebrating Mass in a hospital chapel on 24 March 1980, Fr Sheehy paid tribute to President Higgins’ close ties with El Salvador.

Recalling the President’s visit to El Salvador in 2013, Fr Sheehy told him, “I know that when you visited El Salvador President Higgins you spent some moments at the tomb of Archbishop Romero and at the Wall of Remembrance, which honours those who died or were ‘disappeared’ during El Salvador’s civil war.”

“You remarked on that occasion that ‘to be forgotten is to die twice’. Archbishop Romero has never been forgotten by the people of El Salvador. He represents the solidarity of the Church of Jesus Christ with them in their darkest hour.”

“His beatification is a vindication of the best insights of liberation theology, and an honouring of those who gave their lives in the struggle for justice, and in witness to their faith in the One, from whom the country takes its name.” 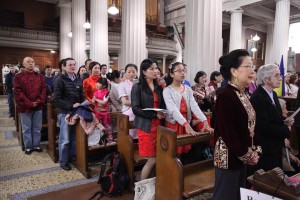 Some of the congregation who attended the Festival of Peoples Mass in the Pro-Cathedral. Pic John Mc Elroy.

Fr Sheehy prayed that as the Church celebrates with joy the witness of Blessed Oscar Romero, may it be, as Pope Francis put it in a letter to the Archbishop of San Salvador, ‘a favourable moment for a true national reconciliation’, and may it inspire other people, not to take life but, to give their lives in the hope of building a better tomorrow for all.

“As Prince Charles put it in a different context earlier this week, ‘let us endeavour to become the subjects of our history and not its victims’,” he said.

“On the eve of his death, Romero wrote the following words: ‘All that surrounds us proclaims the cross. But those who have Christian faith and hope, know that behind this Calvary of El Salvador lies our Easter, our resurrection. That is the Christian people’s hope’.”

At a reception afterwards, President Higgins paid tribute to Trócaire and its involvement in El Salvador and its assistance to Archbishop Romero and his efforts for justice for his people.