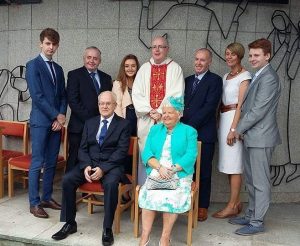 Fr Damien Quigley, who was ordained for the archdiocese of Armagh on Sunday, pictured with his family in Dundalk.

Jesus today is calling for “heroic prophets who take risks for the Gospel”, Bishop Donal McKeown told Fr Christopher McDermott as he ordained him to the priesthood in Derry at the weekend.

In his homily at the ordination Mass in St Mary’s Church, Melmount, Strabane on Sunday, the Bishop of Derry said there were those who suggest that, if only we made things easier, more people would be available for ordination and for consecrated life.

“We live in a culture which says that liberty is about self-indulgence, that life is too short to say no,” he warned and stressed that the Gospel says that “self-indulgence destroys our dignity and makes us slaves of our lowest instincts”.

He told the 30-year-old priest that his ministry will mean a constant dying to self so that he would decrease and Christ increase.

Elsewhere in his homily on Sunday, Bishop McKeown said celibacy is mocked in some quarters as being “outmoded and unrealistic, a barrier to people entering ministry, merely the entry to an elite clerical caste”.

Referring to the readings of the day, he added, “But, like Elijah and the people in the Gospel, you have been called to leave behind many beautiful things, including marriage and fatherhood.”

“You answer the call, not because it is a life-style choice that you fancy but because you have been called to bear the marks of Christ in your body.”

Make sure that the sacrifice of celibacy is matched with simplicity of life-style, he urged Derry’s newest priest and stressed that “A pampered celibacy is a counter-sign of Christ’s call.”

Highlighting how Pope Francis has been very strong on the temptation to careerism and self-promotion in priesthood, Dr McKeown said the Pontiff was doing no more that repeating St Paul’s words from the second reading ‘If you go snapping at each other and tearing each other to pieces, you had better watch or you will destroy the whole community’.

As with every period in history, this is a challenging time for people in Church, just as it is for many in society, politics, economics and family.

“We live in an era of fragmentation where fear seems to be driving people to build walls and not bridges, to protect me, to recall what is perceived as our glory days of old. We see that in the British referendum, the US election campaign and Russian self-assertiveness. And we see the same fear in Church as well.”

He said there are those who want to flee to a mythical, secure past.

“They forget that the People of God are always on an exodus journey. The Promised Land is never behind us. God’s future is always in front of us, beyond our comfort zone. Those who worship the true God will never idolise either an idealised past or a simplistic future.”

He told Fr McDermott that he is called to be a leader who will seek to discern where God is calling his Church forward in the concrete circumstances of today.

“We are called to have confidence, not in our plans, our security or our power, but in Christ’s unreasonable Cross.”

“So, be prepared for a difficult journey in the service of Christ. The role of the priest is changing, not mainly because there are fewer of them but because the needs of the world have changed.”

Fr Christopher is the son of Sean and Rosemary McDermott. He is a former pupil of St Colman’s High School in Strabane.

Separately, on Sunday Fr Damien Quigley who was ordained to the priesthood by Archbishop Eamon Martin of Armagh in the Church of the Holy Redeemer, Dundalk.

Fr Damien celebrated his First Mass of Thanksgiving last night at 7.30pm in the Church of the Holy Redeemer, Dundalk.

Last weekend, Fr Conor McGee was ordained to the priesthood by Bishop Michael Smyth of Meath in the Church of the Assumption, Tullamore, Co Offaly.