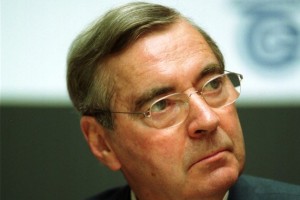 The funeral of renowned broadcaster and academic Brian Farrell attracted a huge congregation to the Church of the Holy Cross, Dundrum, on Friday.

The chief concelebrants were Fr Paul Murphy, a family friend and Benedictine Fr Christopher Dillon, a relative of Marie-Thérèse Farrell.

They were assisted by up to ten other priests including Fr John Bracken, parish priest of Dundrum and Fr Dermod McCarthy of RTE.

Tributes were paid by the former Chief Justice Ronan Keane, Brian’s grandson Robert, and his son, David, who has succeeded his father in the Political Science department of UCD, which Brian helped set up.

In his tribute, Ronan Keane revealed how Brian spent three years with the Salesians before deciding that he didn’t have a vocation.

Born in Manchester, he was sent to Dublin for safety during the Second World War, and lived with his uncle and aunt over their grocery shop in Little Mary Street.

He was educated at Colaiste Mhuire, where he became fluent in Irish.

Ambitious to further his education, he took night courses in UCD where, Ronan Keane revealed, his essays so impressed Professor Aubrey Gwynn, SJ, that he insisted on Brian becoming a full-time student.

At the time, Brian was financing his studies by helping out his uncle in his shop, and when he told Fr Gwynn that he couldn’t afford to go to college full-time, the Jesuit said he would see about that.

It was through Fr Gwynn’s intervention, Ronan Keane revealed, that Brian Farrell was able to complete his full-time college course.

Brian Farrell had an outstanding academic career alongside a broadcasting career as RTE’s Number One political commentator and interviewer for many years.

From 1965 to 2004, he presented all general, presidential and EU parliament election coverage for RTE.

He is survived by his wife of more than sixty years, Marie-Thérèse, whom he met in UCD’s Dramsoc, and children Naomi, Bernard, Miriam, David, Rachel, Theo and Brian.

Tánaiste Joan Burton was among those who attended the Mass while President Michael D Higgins, who is in South Africa at the moment, and the Taoiseach Enda Kenny were represented by members of the Defence Forces.

Brian Farrell passed away on Monday at the age of 85. He wrote a number of books on Irish political history, including ‘The Founding of Dáil Éireann’ and a biography of Seán Lemass.