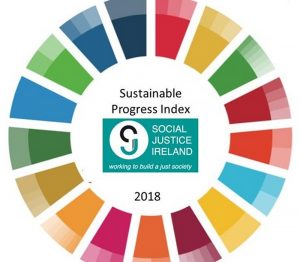 Ireland is performing in the bottom half of 15 similar European countries on a range of important UN backed indicators covering Economy, Environment and Society, according to a new report. The Sustainable Progress Index for 2018 was launched at a seminar on Tuesday, organised by Social Justice Ireland, to examine Ireland’s progress in implementing the UN Sustainable Development Goals (SGDs).

These 17 UN goals seek to achieve over 150 targets aimed at ending poverty, protecting the planet, and ensuring prosperity for all people by 2030. They expand on the eight Millennium Development Goals (MDGs), which were established in 2001 and expired in 2015.

The Index compares 15 EU countries across a range of areas based on the UN’s Sustainable Development Goals. Ireland sits in the top third of rankings among the EU states for quality of education (SDG 4) and Life on Land (SDG 15), the report found.

However Measuring Progress: Economy, Society and Environment in Ireland, written by Professor Charles Clark , Dr. Catherine Kavanagh and Niamh Lenihan, puts Ireland’s overall ranking in the Sustainable Progress Index at 11 out of  the 15 countries analysed. The countries, going from top to bottom of the index are: Sweden 1, Denmark 2, Finland 3, Netherlands 4, Germany 5, Austria 6, United Kingdom 7, France 8, Belgium 9, Luxembourg 10 and Ireland 11. Only Spain, Portugal, Italy and Greece ranked worse than Ireland.

The report was launched on 20th February to mark the United Nations World Day of Social Justice. Among the speakers  at the event were  Dr Catherine Kavanagh, co author of the report, of University College Cork, Dr Sean Healy of Social Justice Ireland, Michael Taft, Economic Analyst and Niamh Garvey, Head of Policy and Advocacy at Trócaire.

Positive elements in the report underline how Ireland is in the top third of rankings for quality education. “However, our particularly bad performance on Environment and inequalities emphasises the need for these Sustainable Development Goals to become an integrated part of policy formation across the board,” said Fr Séan Healy.

The UN Sustainable Development Goals are “becoming a part of the political reality facing policy makers”, he noted. “We need to understand that the rising tide only helps those with strong boats. We need to use data like this to start working towards a more sustainable future.”

It is broadly accepted that if we were to cut down forests for economic growth without replanting in a sustainable manner, we would be hit twice as hard down the line on both environment and economy. We need to start looking at short term economic policies that damage families and promote inequality in the same way, he added.