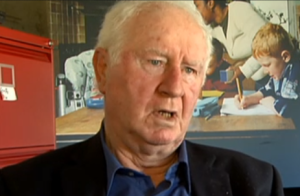 There are 50 million displaced people around the world – the largest number since World War II when there were 90 million.

More wars, conflicts, and climate change have led to millions with no nationality, ID or papers.

“If you hear news of conflict in Somalia or Afghanistan or in the Balkans or someplace like that, give it about four weeks and you are going to see new people on the streets that have come from these places. These are people simply forced to flee,” Columban missionary Fr Bobby Gilmore in a radio interview this Sunday.

“In 1950, there were 90 million displaced people destitute in Europe. That ceased to a certain extent as peace developed and economic development happened, but it seems to be on the rise again,” he states.

“We now have the greatest number of displaced people right since World War Two,” according to Fr Gilmore, a human rights activist for 50 years and founding member, and lifelong President of the Migrant Rights Centre Ireland.

Statelessness means not having a nationality, or the absence of a recognised link between an individual and any state.

In most cases people are alone in a foreign country, unable to speak the language, and without any money.

Most legislation on statelessness puts the onus on individuals to rectify their own undocumented status.

Despite progress since World War II statelessness still remains a quandary for governments and international institutions.

“I expected that the European Union, recognising its own history and weaknesses in relation to minorities, and people on the side-lines, that it would bring in legislation thereby the weak would be protected,” said Fr Gilmore.

“Ireland, as a member of the European Union, has various trade deals with African countries so it’s essential that not only would we take care of the weak within our own world but also reach out to the weak elsewhere.”

In 2014, UNHCR launched a 10-year campaign to eradicate statelessness by 2024, seeking greater political commitment to resolve protracted situations of statelessness and to prevent new situations due to state succession or arbitrary deprivation of nationality.

With war raging across large areas of the Middle East and Africa and elsewhere, an estimated 5.5 million people became newly uprooted during the first six months of 2014, signaling a further rise in the number of people forcibly displaced.

This is according to UNHCR’s new Mid-Year Trends 2014 report, published earlier this month which shows that of those newly displaced, 1.4 million fled across international borders becoming refugees, while the rest were displaced within their own countries (IDPs).

The number of people being helped by UNHCR (referred to in the report as People of Concern) stood at *46.3 million as of mid-2014 – some 3.4 million more than at the end of 2013 and a new record high.

For the first time Syrians have become the largest refugee population under UNHCR’s mandate (Palestinians in the Middle East fall under the care of sister-organization UNRWA), overtaking Afghans, who had held that position for more than three decades.

At more than 3 million as of June 2014, Syrian refugees now account for 23 per cent of all refugees being helped by UNHCR worldwide.

“In 2014 we have seen the number of people under our care grow to unprecedented levels. As long as the international community continues to fail to find political solutions to existing conflicts and to prevent new ones from starting, we will continue to have to deal with the dramatic humanitarian consequences,” said UN High Commissioner for Refugees António Guterres.

He added that the economic, social and human cost of caring for refugees and the internally displaced is being borne mostly by poor communities, enhanced international solidarity is a must.

*UNHCR’s Mid-Year Trends 2014 are set in a particular format and time scale and do not show total forced displacement globally. Figures presented in June each year in UNHCR’s annual Global Trends report, give a fuller picture and as of end 2013 showed that 51.2 million people were forcibly displaced worldwide.

Talking History will be broadcast on Sunday, 25 January 2015 at 7pm.