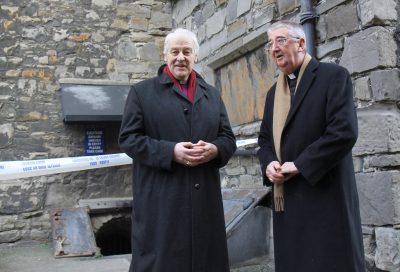 Archbishop Diarmuid Martin & Archbishop Michael Jackson at the entrance to the crypt of St Michan’s Church.

The Archbishop of Dublin has welcomed the recovery of the head of “the Crusader”, which was stolen from the crypt of St Michan’s Church, Dublin, on the weekend of 23 to 25 February.

“We in the United Dioceses of Dublin and Glendalough are delighted that both the head of the Crusader and the skull which also was in the crypt of St Michan’s Church, Church Street, Dublin, have been recovered. They were left in a place where the Gardaí were able to make this recovery,” said Archbishop Michael Jackson, Church of Ireland Archbishop of Dublin and Glendalough.

The Archbishop thanked the Gardaí and everyone else who he said had worked tirelessly to recover the items.

“The emphasis will now be able to turn to consideration of future security and display of the remains in the crypt of St Michan’s. Renewed thanks go to all who have shown interest and concern for the mummies. They are a priceless part of the heritage of the city of Dublin and its citizens,” he said.

He added that the National Museum of Ireland is now acting in an advisory capacity.

Archdeacon David Pierpoint spoke on RTÉ Radio 1, stating that he had seen the recovered skulls. They are being examined by National Museum staff, who will help to dry out the items which had been found “quite saturated, and damp and wet” according to the Archdeacon.

“My fear is that once they start drying out they will just begin to crumble. So we will have to wait and see and possibly re-coffin and re-inter them in the days ahead,” said Archdeacon David Pierpoint.

He added that the head of the Crusader could be laid back with the rest of the body, but whether he can ever be on public view again will depend on the advice given by experts.

He said it is intended that the crypt will be open to the public again to allow all future generations access to the “great treasure” which is there for the city and the nation. It is yet to be seen what form that can now take.

In the attack the crypt of the ancient church, which has an atmosphere that lends itself to preserving mummies, was also badly damaged and several of the mummies, including the 400-year-old remains of a nun, were desecrated in the incident.

Another skull was also recovered in the operation by Gardaí after they received information. Their investigations are ongoing.