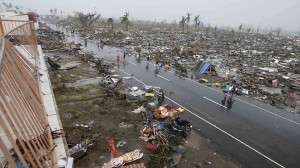 “People are dying with the hunger. They have nowhere to go,” Irish missionary Sr Anne Healy has reported from the Philippines.

Eoghan Rice of Trócaire, who is part of an international humanitarian response team in the south east Asian country, referred to Sr Anne’s first-hand account of her visit to Leyte Island which was devastated by typhoon Haiyan.

“The conditions are drastic after the typhoon. The island of Leyte has suffered tremendously along with three or four other islands. It’s painful to watch. People here are saying that this is the worst disaster of their lives… It’s unreal,” the Co Tipperary nun stated.

The drama, the fear, the unknown. It’s unbelievable that this could happen…,” the Killenaule nun, who is a Sister of the Sacred Heart of Jesus and Mary, said.

“As a human tragedy, the scale of the disaster is so enormous that it is almost beyond our comprehension. What makes this tragedy especially compelling for us is that our own Sisters are significantly affected,” the Mercy Sisters state.

The new Mother of Mercy hospital at Tacloban is 50% damaged, the Holy Infant school and college 75% damaged, and the food supplies have run out.

“It is, of course, impossible to make direct contact with our Sisters, but our understanding is that no Sister is hurt, thank God,” the Mercy Sisters relate.

However, news has filtered through that some of their Filipino Sisters’ families are harmed or missing. In the midst of this disaster, the Sisters of Mercy are continuing to bring human and spiritual comfort and support as the drastic level of need becomes apparent.

This month’s mission newsletter of the Mercy Sisters is dedicated to the Haiyan crisis and the congregation calls for prayers and funds and offer a list of suggestions of what people can do to help.

In the past few days, Misean Cara, has approved two emergency funding applications from member organisations totalling €30,000, and more are expected.

Misean Cara reports that Sisters of the Sacred Heart of Jesus and Mary (Chigwell) are helping families in Cebu City with food and medical supplies.

The Redemptorists are providing shelter to 2,500 people in their church in Tacloban City – the only building that was left standing.

Misean Cara has also reported that the effectiveness of the humanitarian response in the Philippines has been strengthened by the presence of missionaries who remained with their congregations despite the risks.

Missionary schools, hospitals and churches have now become a lifeline for people in need of shelter and food.

In the capital Manila, 250 volunteers with Trócaire partner, Caritas Manila, have been preparing packs for the affected islands.

The packs are designed to last a family of five people three days. 8,000 tarpaulins are being distributed to provide temporary shelter for survivors.

Concern has stated that 9.8 million people across the Philippines have been affected by typhoon Haiyan.

Aid is being coordinated in hubs which are based in Tacloban City and Roxas City. 1,316 evacuation centres have been set up, but more are needed to help the 659,268 people who have been displaced.

The phone network is up and running again, but many areas are without roads, electricity or running water. The people affected urgently need: food, shelter, water and sanitation.