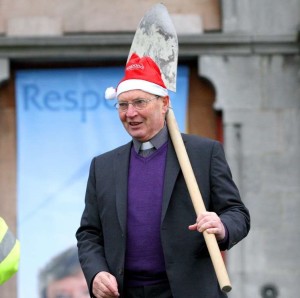 The Board of Respond! Housing Association has announced that its CEO, Fr Patrick Cogan ofm, is to retire from his role as Chief Executive at the beginning of June.

Paying tribute to Fr Cogan’s work, the board said in a statement, “It is especially pleased that Pat will be staying on as a non-executive director and will have a continuing advisory role to Respond! and a sister company, Respond (Support) Ltd.”

This advisory role will include finalising and the completion of planning on a number of important initiatives and projects presently in hand.

The Franciscan friar was one of the founder members of Respond! in 1981 and has been its CEO for over thirty years.

According to the organisation, “Due to his dedication, commitment and effective leadership he has guided and overseen the growth and development of Respond! as a major influence in the Housing Association development sector”.

During that period, Respond! has been involved in the construction of approximately 5,500 homes working in close co-operation and partnership with Government departments, local authorities and other housing associations and citizens.

In 2008, Fr Pat initiated Sivile, a housing association in South Africa in the region of Kokstad, working in cooperation with Archbishop William Slattery who is originally from Killenaule in Co Tipperary and was a Franciscan classmate of Fr Cogan’s.

A hallmark of the work of Respond! over the years has been its emphasis on social inclusion, personal dignity, sustainable community development and facilitation of access to educational opportunities.

This ethos, which has underpinned the approach since Respond’s foundation, is due in no small measure to the values set out by Fr Cogan from the beginning.

The board added that, “The members of the Respond! Board wish to express their sincerest appreciation to Pat for all his service to the mission and work of Respond! and to acknowledge his many positive achievements in the provision of social and integrated housing over the year”.

Respond! was founded in Waterford in 1981 by the Franciscans and incorporated in 1982.

Its mission, as a Christian inspired organisation, is to prevent and relieve hardship and distress amongst those who are homeless and amongst those in need who are living in adverse housing conditions.

To empower individuals and develop their skills for the benefit of the community as a whole.

Arrangements are currently in train in-house to appoint a CEO to take over from Fr Pat with effect from 1 June, 2015.