The recently refurbished Basilica at Knock Shrine provided the beautiful location for a solemn expression of commemoration earlier this month with the performance of ‘Requiem 1916 – Marbhna’, a Mass composed by Ódhrán Ó Casaide.

The Mass was first performed in City Hall, Dublin last January, but the occasion at Knock was the first at which the musical suite was performed in the setting of a Mass. 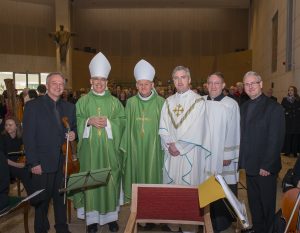 ‘Marbhna’ features a wide range of musical styles, with solo sean nós and classical voice, chamber choir and orchestra, and traditional and early musical instruments. The blend of Irish and classical styles of music reflects the two musical traditions of Ireland at the time of the 1916 Rising.

Musicians included the singers Sibéal Ní Chasaide, Anne Marie Gibbons and Owen Gilhooly, the combined choirs of Knock and surrounding areas, and an orchestra from DIT Conservatory of Music and Drama.

Úna Nolan, director of sacred music at Knock, commented that “Sibéal’s sean nós rendering of the ‘Kyrie’ was beautifully countered by the classical voices of mezzo soprano, Anne Marie Gibbons, and tenor, Owen Gilhooly.” She described as “wonderful” Owen Gilhooly’s portrayal of the ‘Dies Irae’. The ‘Dies Irae’ from ‘Marbhna’ is the first to have been composed for the Irish language. 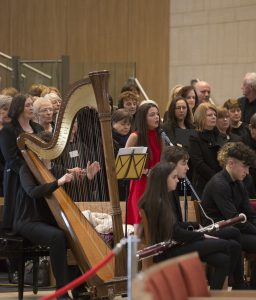 The Chief Celebrant at the Mass was Bishop Brendan Kelly, Bishop of Achonry. He was welcomed, along with the Papal Nuncio, Charles Brown, by Fr Richard Gibbons, Rector of Knock Shrine. Fr Gibbons also gave a special welcome to two women who were born in 1916 – Ódhrán Ó Casaide’s mother, Noreen, and local woman, Eileen O’Connell.

Speaking at the start of the Mass, Bishop Kelly told those gathered that they came together to “salute, to pray for and to remember the men and women of 1916” and all of our dead at the end of the great Jubilee Year of Mercy and during the month of November. He said that this was a time when all Christians “look death in the face and know that it shall have no dominion, for we are an Easter people, a risen people, who sing and make music together, as we remember the great things done for us in Jesus Christ our Lord.”

During the homily, Fr Gibbons spoke about how human beings have different attitudes towards death, and that these attitudes are sometimes revealed in their epitaphs. He referred to how we try to come to an understanding of “what the end of life is” and where we go after this life, and said that what life after death will be remains “clouded in great mystery.”

Fr Gibbons commented that Christians have as many questions about life after death as anyone else. We have, however, a context for these questions, and this context is the Resurrection, which he described as “the key that unlocks the door”.

He said that in the Mass it is “necessary for us to come together to understand the meaning of life and the purpose of death.” He observed how, going through life, we meet death in many forms – slow or sudden, when the person who dies is young or old, after an accident or prolonged illness, and sometimes tragically. One thing is certain, he said: “the path of life leads inevitably to the grave. It is one appointment we cannot cancel.” 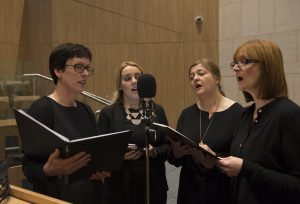 The question we have to ask, suggested Fr Gibbons, is: “Is our notion of death bound up only with thoughts of despair, emptiness and ending, or is it a feeling of sorrow mixed with joy?”

For Christians, he said, sorrow and joy can go together, because “we share in that glorious Resurrection in the life of Christ.”

He said that November is a fitting month to remember our dead, as the days shorten, the nights grow longer and the year dies. But we remember them, “not with fear and not with despair, but in the hope of joining them in everlasting life.”

He concluded by stating that the spirit of the dead lives on in the memory of the living, and posed the question: “What will our epitaph be?”