Home > News > Report to highlight scale of persecution of Christians

Report to highlight scale of persecution of Christians 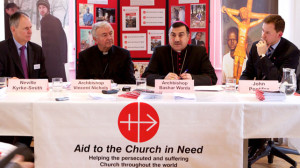 The impact of violence, persecution and exodus on Christians in the Middle East and elsewhere will be highlighted in a wide-ranging report due to be released by a leading Catholic charity this week.

Aid to the Church in Need will publish ‘Persecuted and Forgotten? A Report on Christians oppressed for their Faith 2013-15’, which assesses the situation in 22 countries where there are grave violations of religious freedom including physical attacks, kidnappings and murders.

The report, which will be launched on Tuesday, 13 October, makes a direct comparison with the situation two years ago.

In making its assessment, the analysis draws on in-country reports, witness testimonies, interviews with bishops, Sisters and lay people. This research material is compared with evidence from NGOs with expertise in the field.

The launch of ‘Persecuted and Forgotten? 2013-15’ comes at a time of increasing concerns for the future of Christianity in parts of the Middle East where numbers have plummeted.

With previously published research already showing Christianity to be the world’s most persecuted religion, the ACN report will show the growing impact of extremism in Africa, the Asian sub-continent and elsewhere.

‘Persecuted and Forgotten? 2013-15’ also assesses the problems facing Christians and other religious minorities in countries such as China and Vietnam where historically atheistic regimes continue to put pressure on faith groups.

The report launch on Tuesday takes place in the House of Lords in London at a meeting chaired by Christian persecution expert and campaigner Lord David Alton of Liverpool, a trustee of Aid to the Church in Need.

Speakers at the launch include Archbishop Silvano Tomasi, the Holy See’s Permanent Observer to the United Nations in Geneva and UK Foreign Office Minister Tobias Ellwood MP who has responsibility for the Middle East.

Witnesses of persecution will give their testimonies including Archbishop Jean-Clement Jeanbart of Aleppo, Syria, teenager Victoria Youhanna, who escaped Boko Haram militants in northern Nigeria and Timothy who has experience of persecution in North Korea.

John Pontifex, Editor-in-Chief of ‘Persecuted and Forgotten? 2013-15’, will outline the report’s findings.

On Wednesday, 14 October at 7.30pm the ‘Persecuted and Forgotten? 2013-15’ report will be presented in Liverpool Metropolitan Cathedral, Mount Pleasant, Livepool L3 5TQ, with speakers including Archbishop Jeanbart, Timothy Cho and Neville Kyrke-Smith, UK National Director of Aid to the Church in Need.

On Thursday, 15 October, following Mass at 7pm, the report will be presented at St Mary’s Cathedral, 20 Huntly Street, Aberdeen AB10 1SH, Scotland with speakers including Victoria Youhanna and Aid to the Church in Need project partner Father Ziad Hilal who has provided emergency help in Homs, Syria.

Also speaking will be Iraqi priest Fr Douglas Bazi who survived torture by Al Qaeda extremists and who is coordinating ACN aid for refugees in the north of the country.