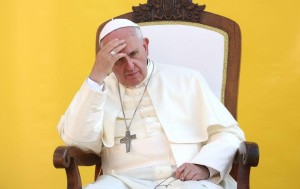 Pope Francis is grieving the death of his two great-nephews aged two and eight months who were killed in a road accident in Argentina late on Tuesday night along with their young mother.

The Pope’s nephew, Emanuel Horacio Bergoglio, was seriously injured in the accident which reportedly occurred on a provincial motorway between the Argentinean cities of Rosario and Cordoba.

Emanuel Bergoglio and his wife Valeria Carmona and their two children, Jose and Antonio, were returning to their home city of Buenos Aires following a weekend break when their small car ploughed into a grain truck shortly after midnight.

Vatican spokesman, Fr Federico Lombardi said “the Pope was informed about the tragic accident. He is deeply pained.”

He added that the Pope has asked “all who share in his grief to unite with him in prayer.”

Thirty-nine-year-old Valeria Carmona and her two sons were dead on arrival at the hospital in the town of Villa Maria according to the assistant director of the hospital, Ignacio Bruno.

The social worker assisted police with victims of domestic violence according to the chief of the Buenos Aires Metropolitan Police, Horacio Alberto Gimenez.

Emanuel Bergoglio (38), who is the son of the Pope’s late brother Alberto, works as a medical researcher.

He suffered extensive injuries in the crash and underwent surgery and is being closely monitored by medical staff.

According to Francisco Fortuna, director of the hospital, “He has made good post-operative progress and the haemorrhage, which was the reason for the surgical intervention, has been contained.”

News of the tragedy was received by Pope Francis just as he returned to Rome following his visit to Korea, his first trip to Asia since he was appointed in 2013.