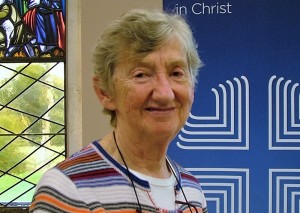 For a long time now, we have been living in a globalised world where goods, information and capital move swiftly and freely across borders but where movement of people are subjected to increasing restrictions, a former Director of the Refugee and Migrant project of the Catholic Bishops Conference has said.

Calling for greater rights for migrants, Sr Joan Roddy said migration was a permanent feature of the world today.

Pointing to the 59.5 million people forcibly displaced by persecution, conflict, violence and human rights violations at the end of 2014, she said that developing regions like Turkey, Pakistan, Lebanon, Iran, Ethiopia and Jordan were the “top host countries” talking around 86% of the world’s refugees.

Of the four million Syrian refugees, close to 1.2million have registered in Lebanon making up more than 20% of the population of the country.

According to UNHCR’s Global Trends 2014 Report published in June 2015, up to now only a small proportion of those displaced by conflict seek asylum in Europe (around 6%).

Sr Roddy told a gathering of the Inter Church meeting in Laois considering the theme: Missional Challenges in the Rights-Based Society that the migrant journey was multi-dimensional.

“For every migrant, there is a geographic journey, a bureaucratic journey and, deepest of all, even if least visible, there is an emotional journey.”

The geographic is the most obvious aspect of the migrant journey, she said.

“In these last months we have learned a great deal about distances travelled and obstacles encountered along the way. In our living rooms, we have seen the faces of parents and small children as they walk and walk and walk.”

The bureaucratic journey depended largely on the “particular category” into which a migrant falls – asylum seeker, refugee or migrant. “The label assigned to her or him is determinative,” she said.

Currently 8,000 people await a decision on their asylum application with nearly half 3,607 in Direct Provision accomodation. 1,500 of these have been living in these centres for over five years. Over a third are children.

The Working Group on the Protection System set up by Minister Frances Fitzgerald recommended in June that asylum applicants waiting for five or more years for their case to be processed should be given a positive decision within six months of the publication of the report.

“Until now few of the report’s recommendations have been implemented nor is there any sign of a programme of implementation being put in place,” she said. “The recent Budget did not include anything for asylum seekers.”

Sr Roddy was even more concerned for those arriving in Ireland in 2015 to seek asylum projected to be over 3,000 people.

For over a decade the Government had proposed to put in place “a single asylum application procedure” to replace the current multi-layered, sequential and cumbersome process. This had not occurred.

In response to the on-going arrival in Europe of large numbers of migrants, Ireland is now to accept up to 2,900 persons “over a period of time that is not fully clear”.

“In the absence of an overall EU plan and with Ireland having nothing more than a rough sketch of this new programme, one can only hope that the situation of new arrivals will not replicate that of the people who over the past twenty years or so have sought a place of refuge in this country,” she said.

Pointing to the Universal Declaration of Human Rights which recognised the “inherent dignity and of the equal and inalienable rights of all members of the human family”, Sr Roddy said that “irrespective of what differences there may be, persons and minority groups of persons, need to be recognised as belonging to the same moral and civic world as the majority”.

Maintaining dignity is essential, she said, quoting Prof Brendan Kelly, “Enforced dispersal impairs psychological well-being and undermines dignity; relocation should be arranged collaboratively with migrants and host communities. Enforced idleness is an unnatural circumstance that is uniquely corrosive of dignity and well being; people need to be engaged in meaningful activity and allowed to work.”