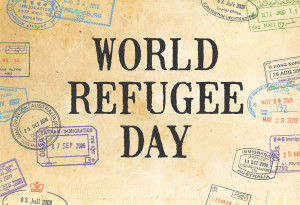 To mark World Refugee Day (20 June 2014) the Jesuit Refugee Service (JRS) has warned of the long term consequences for millions of children across the globe, especially in Iraq and Syria at the present time, forced to flee persecution, conflict and violence.

In their statement, National Director of JRS Ireland, Eugene Quinn said these children were being forced to grow up all too quickly and denied their basic right to a childhood.

“Children displaced by conflict in Iraq and Syria, will not be focusing on the World Cup in Brazil but on something more fundamental – survival.”

“War, global inequality and the intensity of natural disasters have forced millions to flee their homes over the past decade. Forced to abandon their homes, children are not just leaving behind their friends, their family and their way of life but all too often their childhood also,” he warned.

As a result of the worst refugee crisis in nearly 20 years, more than one million children have been forced to flee Syria.

Among the atrocities against children reported in Syria are recruitment for combat, detention with adults and the use of children as human shields.

The response by Ireland and Europe to a UNHCR appeal to resettle 30,000 of the most at risk refugees has been disappointing. To date, only 12,000 places have been offered by EU Member States.

“Children by their very nature constitute some of the most vulnerable Syrian refugees. Ireland must show leadership by doubling its existing commitment and offering refuge, at a minimum, to 300 Syrian refugees in 2014,” Eugene Quinn said.

Syrian children, and families, are not alone in seeking safety and refuge in Ireland.

One third of all asylum seekers living in the Direct Provision system are children and uniquely vulnerable to the lifelong consequences of growing up in an institutionalised environment.

Often, children will grow up without the memory of their parents ever cooking a family meal.

Eugene Quinn concluded: “We as Irish society have a duty of care to these children living within our communities and by extension Ireland, as a nation of the world, has a duty to the children of Syria.”

“Forced migration will continue to deny children their right to a childhood unless action is taken to provide them with shelter, hope and a home during their time of need.”