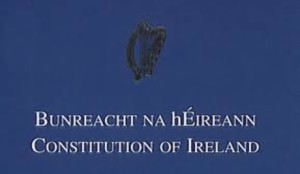 The Irish Council of Churches and the Irish Inter-Church Meeting have described the current reference to blasphemy in the Constitution as “largely obsolete”.

The umbrella group represents almost all of the Christian churches in Ireland.

Their evaluation is contained in a submission sent to the Constitutional Convention which is examining the proposal for the removal of the offence of blasphemy from the Constitution.

The Council of Churches said the current reference to blasphemy may give rise to concern “because of the way such measures have been used to justify violence and oppression against minorities in other parts of the world.”

However, both the Islamic Cultural Centre and the Knights of Columbanus have argued for the offence to be retained.

In a statement, Mervyn McCullagh, Executive Officer of the Irish Council of Churches and the Irish Inter-Church Meeting, said member Churches had been reflecting on the values and principles that should underpin the human right to freedom of religion and freedom of conscience in a truly inclusive, pluralist Ireland.

“The promotion of freedom of religion and freedom of conscience for all in society greatly enriches the social fabric of a country, and is one aspect of respect for the dignity of human persons,” the statement said.

“The human right of faith communities to contribute to public life, including public debate on issues that are of importance to everyone, without being subjected to attack or ridicule, needs to be acknowledged and respected,” it continued.

“We consider that it is vital to ensure that the rights of individuals and communities to practice and live out their faith openly are protected by law.”

“These guarantees may be better achieved through established or new constitutional and legislative provisions for the protection for freedom of religion, belief and expression, as well as legislation against discrimination and hate crimes.”

“As Churches, we cannot reflect on these questions without expressing our solidarity with all those, throughout the world, who are experiencing persecution, and human rights abuses, because of their faith or beliefs.”

“We urge the Convention to assist the Government of Ireland in making our country a leading example of protection for freedom of religion, freedom of conscience and the human rights of minorities.”

Meanwhile, Dr Ali Selim of the Islamic Cultural Centre of Ireland defended the ban saying it protects both peaceful co-existence and freedom of expression.

Today, members will vote on whether to recommend that the Government hold a constitutional referendum on the issue. If it agrees to amend the Constitution, it must also include a timeframe for a referendum.

Tom Arnold, chairman of the Constitutional Convention, said there has been much discussion in recent years about the place of the offence of blasphemy in the Irish Constitution.

“The strong level of public interest in the subject is evident from the high number of submissions that we received through the website and also from those members of the public that have raised it at our regional meetings,” he said.

The Defamation Bill 2006, whcih was signed into law in July 2009, introduced a number of major reforms including giving greater definition to criminal offence of blasphemy.

A person found guilty of publishing or uttering “blasphemous matters” can be fined, on indictment, a maximum €25,000.

The Irish Council of Churches was founded in 1923 in the aftermath of the Civil War and is the formal national body through which member Churches engage, dialogue and act on a wide variety of issues.

Together with the Irish Inter-Church Meeting, which incorporates the Catholic Church, the membership reflects the contemporary landscape of Irish Christianity across Protestant, Orthodox, Reformed, Catholic, Independent and Migrant-led Churches and encompass the vast majority of Christians within Ireland.

The current President is Rev Fr Godfrey O’Donnell, chair of the Orthodox Network of Churches. The Vice-president is the Rev Dr Donald Watts, Clerk of the Presbyterian Church in Ireland.

The immediate past-president is the Most Rev Richard Clarke, Church of Ireland Archbishop of Armagh and Primate of all Ireland. Cardinal Séan Brady co-chair the Irish Inter Church Meeting.

The Churches currently represented by the Irish Council of Churches are: