Red light-up against the persecution of people of faith 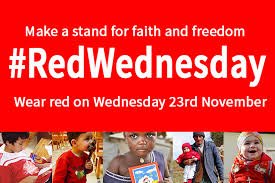 Archbishop of Armagh, Dr. Eamon Martin, and Bishop Denis Nulty,Bishop of Kildare & Leighlin,  are among Irish church leaders supporting the #RedWednesday initiative on 22nd November 2017, organised by the Aid to the Church in Need charity to stand in solidarity with victims of persecution, and oppression carried out in the name of religion.

Archbishop Martin has encouraged people to wear something red – a tie or scarf, as a symbolic reminder of the many Christians who have shed blood for their Christian faith. People are also encouraged to remember the witness and sacrifice of past and present martyrs by praying the Angelus at 12 noon and 6pm.

Having spoken about red as symbol of martyrs, and of the many who died for their faith in the past, Archbishop Martin said,  “It is shocking to realise that in the twenty-first century, Christians continue to be persecuted, displaced, intimidated, tortured, and even executed on account of their faith.  Places of worship are targeted by violence and destruction.”

Speaking at a special Vigil of Prayer for lighting red Saint Patrick’s Cathedral in Armagh, he recalled last year’s discussion about the persecution of Christians at the 27th annual Irish Inter-Church Meeting in Portlaoise. Afterwards participants issued a statement which said, “As churches, we can play our part by keeping this issue on the agenda of our political leaders and ensuring that the victims of persecution are not forgotten, by making donations in support of the urgent humanitarian needs and by working to ensure that our society models the inclusive approach to minorities we would wish to see in the Middle East and throughout the world.” 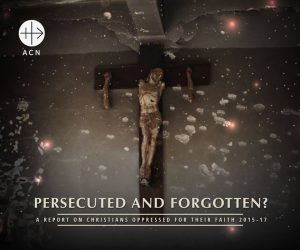 He also said it was encouraging to hear that the issue of persecution of Christians was discussed at debates in the Dáil and at Westminster in April and July 2017.

He highlighted what he called “grim realities” in the recently published report on Christians oppressed for their faith by Aid to the Church in Need: Persecuted and Forgotten 2015-2017. (see catholicireland.net 25 October, 2017  )

He said that highlighting the persecution of fellow Christians reminds us of the importance of reconciliation and peace building between Christians of different traditions – a lesson that is particularly important for Christians in Ireland.

The plight of persecuted Christians reminds us of the importance of advocating for freedom of conscience and religion which is enshrined in article 18 of the UN Declaration of Human Rights.

“Governments have a responsibility to respect the fundamental right to freedom of conscience and religion of all their citizens, including (indeed particularly) when these citizens are a minority in their country.  This is true whether these citizens are Christians or, for example, Muslim refugees in Myanmar or people of the minority Yazidi religion in northern Iraq,” he said.

He said that people in Ireland and the UK should call on Governments to include in their foreign policies, respect for the freedom “to manifest” religion or belief, whether in teaching, practice, worship or observance.  Countries should be asked to uphold this freedom as a condition to receiving aid funding.

He said that the martyrdom and witness of fellow Christians invites us to consider how we ourselves witness to our faith in Irish society.  The call to witness should compel people to “courageously present in public discourse” Christian convictions, he said. These include the dignity of the person and sacredness of all human life; marriage and the family; about the widening gap between rich; and care for the Earth.

Bishop Nulty of the Kildare and Leighlin Diocese tweeted his support for the day. The Archdiocese of Dublin has also promoted Red Wednesday on its social media. 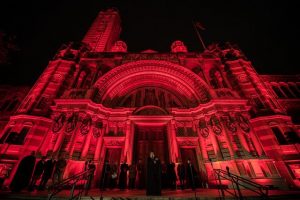 The Presentation Sisters, are supporting this campaign stating that they know that in a world where the fear of being different, where prejudice and narrow-mindedness lead to suffering, they want to work towards transcending divisions and bear witness to the gospel of love and unity. “We respect people of all faiths, traditions and cultures, and join with those who promote a more inclusive community of life. As an international Congregation our lives are enriched through the diversity of cultures among us,” they stated in a quote from “Our Way of Life” (C12)

Aid to the Church in Need (ACN) has a week of events from 19 – 26th November, and on 22nd November many landmarks worldwide will be illuminated in red including the Houses of Parliament and Westminister Cathedral in London and the cathedrals in Armagh and Derry, over 80 cathedrals and shrines in the Philippines and the parish church of Our Lady of Perpetual Help in Erbil, northern Iraq.