General Themes: Faith was praised in Abraham. The Lord urges us to follow his example.

Today we also celebrate St Thomas Aquinas who taught that all Christian revelation and human knowledge are all aspects of a single truth. Thomas was declared patron of schools, universities, students and booksellers. 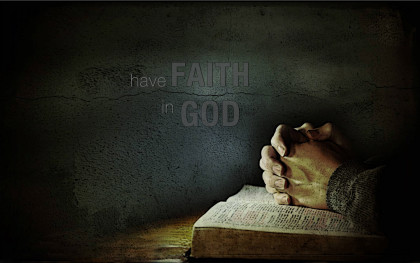 nly faith can guarantee the blessings that we hope for, or prove the existence of the realities that at present remain unseen. It was for faith that our ancestors were commended.

It was by faith that Abraham obeyed the call to set out for a country that was the inheritance given to him and his descendants, and that he set out without knowing where he was going. By faith he arrived, as a foreigner, in the Promised Land, and lived there as if in a strange country, with Isaac and Jacob, who were heirs with him of the same promise. They lived there in tents while he looked forward to a city founded, designed and built by God.

It was equally by faith that Sarah, in spite of being past the age, was made able to conceive, because she believed that he who had made the promise would be faithful to it. Because of this, there came from one man, and one who was already as good as dead himself, more descendants than could be counted, as many as the stars of heaven or the grains of sand on the seashore.

All these died in faith, before receiving any of the things that had been promised, but they saw them in the far distance and welcomed them, recognising that they were only strangers and nomads on earth. People who use such terms about themselves make it quite plain that they are in search of their real homeland. They can hardly have meant the country they came from, since they had the opportunity to go back to it; but in fact they were longing for a better homeland, their heavenly homeland. That is why God is not ashamed to be called their God, since he has founded the city for them.

It was by faith that Abraham, when put to the test, offered up Isaac. He offered to sacrifice his only son even though the promises had been made to him and he had been told: It is through Isaac that your name will be carried on. He was confident that God had the power even to raise the dead; and so, figuratively speaking, he was given back Isaac from the dead.

1. He has raised up for us a mighty saviour
in the house of David his servant,
as he promised by the lips of holy men,
those who were his prophets from of old.   Response

2. A saviour who would free us from our foes,
from the hands of all who hate us.
So his love for our fathers is fulfilled
and his holy covenant remembered.            Response

3. He swore to Abraham our father
to grant us, that free from fear,
and saved from the hands of our foes,
we might serve him in holiness and justice
all the days of our life in his presence.        Response

With the coming of evening that same day, he said to them,
Let us cross over to the other side’.
And leaving the crowd behind they took him, just as he was, in the boat; and there were other boats with him. 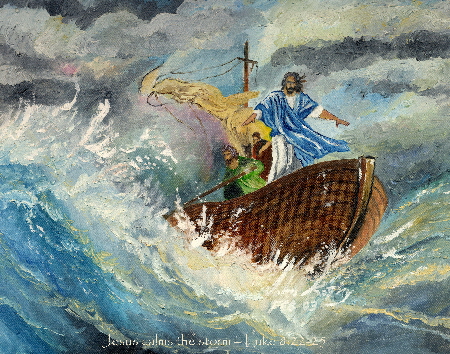 Then it began to blow a gale and the waves were breaking into the boat so that it was almost swamped. But he was in the stern, his head on the cushion, asleep.

They woke him and said to him,
‘Master, do you not care? We are going down!’
And he woke up and rebuked the wind and said to the sea,
‘Quiet now! Be calm!‘
And the wind dropped, and all was calm again.

Then he said to them,
‘Why are you so frightened? How is it that you have no faith?’

They were filled with awe and said to one another,
‘Who can this be? Even the wind and the sea obey him.’

When a storm breaks over us in life, we often find ourselves in panic mode. At such times, it can be very helpful to have someone who remains calm as the storm rages. Their calmness can help to calm us. We find such a scenario in today’s gospel reading. The disciples and Jesus find themselves in a storm at sea. As a gale blew, waves were breaking into the boat, just as waves sometimes break over the sea wall when the wind is especially strong and the tide is high. In the midst of this storm, the disciples are clearly in panic mode. ‘Master, do you not care? We are going down!’, they exclaimed to Jesus. In contrast, Jesus is a centre of calm in the midst of the storm. He is so calm that he sleeps through the storm. The evangelist gives us that graphic little detail of the head of Jesus asleep on a cushion in the stern of the boat.

The disciples’ panic did not disturb Jesus, rather his calm becalmed his disturbed disciples, and also becalmed the raging storm. When the storm had passed, Jesus asks his disciples two questions, ‘Why are you so frightened? How is it that you have no faith?’ In Mark’s gospel, the opposite of faith is not so much doubt as fear, the failure to trust. The Lord is always present to us as the centre of calm in the midst of the storms of life. Rather than allowing ourselves to be overcome with fear, he keeps calling on us to open ourselves to his calming presence, trusting that he is more powerful than any storm that life can hurl at us and that he will ultimately protect us from all that threatens us.
________________