On their way back, as David was returning after killing the Philistine, the women came out to meet King Saul from all the towns of Israel, singing and dancing to the sound of tambourine and lyre and cries of joy; and as they danced the women sang: 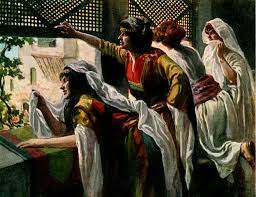 ‘Saul has killed his thousands,
and David his tens of thousands.’

Saul was very angry; the incident was not to his liking.
They have given David the tens of thousands,’ he said ‘but me only the thousands; he has all but the kingship now.’
And Saul turned a jealous eye on David from that day forward.

Saul told Jonathan his son and all his servants of his intention to kill David. Now Jonathan, Saul’s son, held David in great affection; and so Jonathan warned David;
‘My father Saul is looking for a way to kill you,’ he said ‘so be on your guard tomorrow morning; hide away in some secret place.  Then I will go out and keep my father company in the fields where you are hiding, and will talk to my father about you; I will find out what the situation is and let you know.’

So Jonathan spoke well of David to Saul his father; he said,
‘Let not the king sin against his servant David, for he has not sinned against you, and what he has done has been greatly to your advantage. He took his life in his hands when he killed the Philistine, and The Lord brought about a great victory for all Israel. You saw it yourself and rejoiced; why then sin against innocent blood in killing David without cause?’

Saul was impressed by Jonathan’s words and took an oath,
‘As the Lord lives, I will not kill him’.
Jonathan called David and told him all these things. Then Jonathan brought him to Saul, and David attended on him as before.

Gospel Acclamation
Alleluia,             Alleluia!
Your words are spirit , Lord, and they are life.
Alleluia!

Jesus withdrew with his disciples to the lakeside, and great crowds from Galilee followed him. 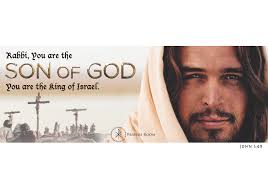 From Judaea, Jerusalem, Idumaea, Transjordania and the region of Tyre and Sidon, great numbers who had heard of all he was doing came to him. And he asked his disciples to have a boat ready for him because of the crowd, to keep him from being crushed.For he had cured so many that all who were afflicted in any way were crowding forward to touch him. And the unclean spirits, whenever they saw him, would fall down before him and shout, ‘You are the Son of God!’
But he warned them strongly not to make him known.

The beginning of today’s gospel reading says that Jesus withdrew with his disciples to the lakeside. Elsewhere in the gospels, when Jesus withdraws it is usually to spend time in prayer. The demands on him were great, but he needed to withdraw from people from time to time so that he could be with God in prayer. On this occasion, according to the gospel reading, when Jesus withdrew, large crowds followed him, not only from Galilee, but from a wide area. They wanted to touch him so as to be healed.

Whereas Jesus wanted to touch God his Father in prayer, the needy crowds wanted to touch Jesus for healing. Jesus did not spare himself when it came to serving the needy, but he also needed to withdraw to pray. His ministry to others flowed from his prayer. Prayer is as central to Jesus’ life as risen Lord as it was during his public ministry on earth. He lives for ever to intercede for us. As well as praying for us, the risen Lord continues his active ministry among us that we find portrayed in the gospels. He remains close to us in our suffering to strengthen and heal us, inviting us to touch him. He also works through us for the strengthening and healing of others. Jesus continues to do as risen Lord what we find him doing in today’s gospel reading, withdrawing to pray and serving the needy and broken. That same twofold movement is to shape our lives as his followers. We withdraw to pray and we come from prayer to bring God’s healing love to those whom we meet.

The scripture readings are taken from The Jerusalem Bible, published by Darton, Longman and Todd Ltd and used with the permission of the publishers.  http://dltbooks.com/
The Gospel reflection is available with our thanks from Reflections on the Weekday Readings 2021-2022: My Words Will Not Pass Away by Martin Hogan and published by Messenger Publications  c/f  https://www.messenger.ie/product/my-words-will-not-pass-away-reflections-on-the-weekday-readings-for-the-liturgical-year-2021-22/