The Presentation of the Lord
World Day for Consecrated Life

General Themes: This feast is a remembrance of the Lord and Mary, his mother, before God’s presence, with candles in heir hands we welcome the Lord as our Light to reveal him to the nations. 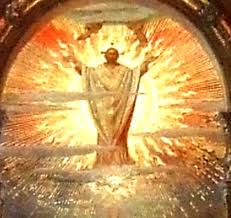 Look, I am going to send my messenger to prepare a way before me. And the Lord you are seeking will suddenly enter his Temple; and the angel of the covenant whom you are longing for, yes, he is coming, says the Lord of hosts. Who will be able to resist the day of his coming? Who will remain standing when he appears?

For he is like the refiner’s fire and the fuller’s alkali. He will take his seat as refiner and purifier; he will purify the sons of Levi and refine them like gold and silver, and then they will make the offering to the Lord as it should be made. The offering of Judah and Jerusalem will then be welcomed by the Lord as in former days, as in the years of old.

A reading from the letter of St Paul to the Hebrews       2:14-18
Theme: It was essential that he should in this way become completely like his brothers and sisters.

Since all the children share the same blood and flesh, Jesus too shared equally in it, so that by his death he could take away all the power of the devil, who had power over death, and set free all those who had been held in slavery all their lives by the fear of death. For it was not the angels that he took to himself; he took to himself descent from Abraham. It was essential that he should in this way become completely like his brothers so that he could be a compassionate and trustworthy high priest of God’s religion, able to atone for human sins. That is, because he has himself been through temptation he is able to help others who are tempted.

Gospel  Acclamation          Acts 16: 14
Alleluia, alleluia!
The light to enlighten the pagans and the glory of your people Israel.
Alleluia!

When the day came for them to be purified as laid down by the Law of Moses, they took him up to Jerusalem to present him to the Lord- observing what stands written in the Law of the Lord: Every first-born male must be consecrated to the Lord- and also to offer in sacrifice, in accordance with what is said in the Law of the Lord, a pair of turtledoves or two young pigeons Now in Jerusalem there was a man named Simeon. He was an upright and devout man; he looked forward to Israel’s comforting and the Holy Spirit rested on him. It had been revealed to him by the Holy Spirit that he would not see death until he had set eyes on the Christ of the Lord. Prompted by the Spirit he came to the Temple and when the parents brought in the child Jesus to do for him what the Law required, he took him into his arms and blessed God; and he said: 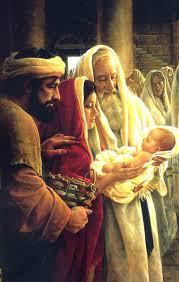 ‘Now, Master, you can let your servant go in peace, just as you promised;
because my eyes have seen the salvation
which you have prepared for all the nations to see,
a light to enlighten the pagans and the glory of your people Israel’.

As the child’s father and mother stood there wondering at the things that were being said about him, Simeon blessed them and said to Mary his mother,
‘You see this child:
he is destined for the fall and for the rising of many in Israel,
destined to be a sign that is rejected,
and a sword will pierce your own soul too so that the secret thoughts of many may be laid bare’.

There was a prophetess also, Anna the daughter of Phanuel, of the tribe of Asher. She was well on in years. Her days of girlhood over, she had been married for seven years before becoming a widow. She was now eighty-four years old and never left the Temple, serving God night and day with fasting and prayer. She came by just at that moment and began to praise God; and she spoke of the child to all who looked forward to the deliverance of Jerusalem.

When they had done everything the Law of the Lord required, they went back to Galilee, to their own town of Nazareth. Meanwhile the child grew to maturity, and he was filled with wisdom; and God s favour was with him.

The feast of the Presentation of the Lord is celebrated forty days after the feast of Christmas, as it was traditionally understood that Jesus was presented in the Temple forty days after his birth. This day is also known as Candlemas, because candles are blessed on this day to remind us that Jesus is the light of the world and the light of our life. This is in keeping with Simeon’s reference to the child Jesus in the gospel reading as a ‘light to enlighten the pagans and the glory of your people Israel’. Simeon’s prayer beginning, ‘Now, Master, you can let your servant go in peace’, has become an integral element of the Night Prayer of the Church.

Simeon recognized the true identity of the child that the young couple from Nazareth brought into the Temple. Simeon realized who had just entered the Temple, who had entered his life. Looking at this new born child, he could see the ‘salvation’ that God had been preparing for all the nations to see. Simeon recognized that the light of God’s love was shining through the face of this child, a light that would enlighten the pagans and bring glory to Israel. The gospel reading suggests that Simeon had this level of insight into the child of Joseph and Mary because the Holy Spirit rested on him and he came to the child prompted by the Holy Spirit. It is the Spirit who allows us to see Jesus as he really is.

Paul, in his first letter to the Corinthians, says, ‘No one comprehends what is truly God’s except the Spirit of God’ and declares, ‘we have received… the Spirit that is from God, so that we can understand the gifts bestowed on us by God’. We need the Holy Spirit to appreciate the gifts that God has given us, especially God’s greatest gift, his beloved Son, who is with us until the end of time. On this feast, we invite the Holy Spirit to rest upon us afresh, as he rested on Simeon, so that, like him, we may recognize the many ways that the risen Lord enters our lives.